Lucasfilm Stunned by Lack of Complaints About The Mandalorian 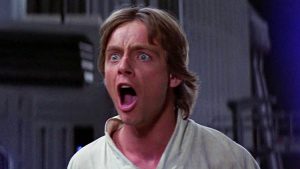 “We just don’t know how to react. We’ve never had this happen before!”

These words of a Lucasfilm executive echoed the sentiments of dozens of other employees from the blockbuster division of Disney. Some were seen in a fetal position, rocking back and forth, muttering to themselves “no complaints…no complaints…” trying to deal with the traumatic event. The source of the angst and hand-wringing comes from the release of “The Mandalorian” on the Disney streaming service. The show has been declared a massive hit from fans and critics alike, which has led to a number of late-night meetings at the Lucasfilm California headquarters.

“Cathy Onassis (Lucasfilm president) has had our PR department working overtime,” producer Fave Diloni said. “We’re not sure if we need to apologize, not apologize, fire someone, fire everyone, we don’t know. We might scrap “Star Wars Episode IX” and put out a Baby Yoda movie. No one knows how to react. Clearly we need to bring in outside consultants because we’re in virgin territory here.” Disney stock was shaky throughout Friday as positive reviews from fans came pouring in. The stock rose on good news, then sank because Star Wars hadn’t received good news before, then rose again when traders realized that good news was, indeed, good news.

“Since 2012, it’s been doom and gloom,” one inside trading expert said. “The fanbase has shredded the franchise so now what? How does LFL handle this? This good news may be the end of the division as we know it.”

We asked a Marvel senior executive about this sudden reversal of fortune and how his company would have dealt with it. “What are you talking about?” he replied. “What is this ‘bad news’ that you talk about? We have never heard of that before!”

Employees have been scrambling to deal with the outpouring of positive comments from fans. Unconfirmed rumors swirl that Jed Davreau, the executive producer of the series, will either be fired for breaking tradition of producing hated content, or be voted into the presidency of the United States by Congress.

“I can’t rule anything out,” said Speaker of the House Ancy Elosi. “It’s not like we know how to deal with positive news from people. It hasn’t happened…at all..now if you’ll excuse me, someone overheard three college football fans talking about what their roommate’s cousin’s niece’s babysitter said about President Rump’s dealings with Freedonia. They are clearly experts and must be subpoenaed to testify immediately.” Our exclusive inside sources at Lucasfilm will keep us informed and we will bring you any developments as they happen. For now, we can confirm that Starbucks has hooked up a pipeline directly to several conference rooms as Lucasfilm executives work 24 hours a day to deal with this crisis. Also unconfirmed are reports that multiple Crisis Response Teams were called in to help employees deal with their trauma.

“We may never recover from this,” Lucasfilm Regional Manager Michael Scarn told me. “Is it better to be hated or to be loved? I say both. I want the fans to hate how much they love us.”

Author’s Note: Yes this is a spoof article meant to give you a chuckle for your weekend and should not be taken seriously. I’ll write one of these each weekend to help lighten the mood. Special thanks to Philip Gilbert in the UK for helping out with the graphic work.