The Mandalorian is Still Going Strong, but is it Actually Going Anywhere? 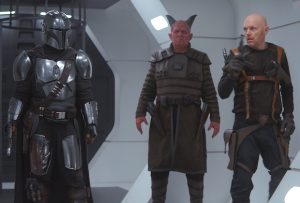 “This is the way.” With six episodes down and only two to go before the end of the season, “The Mandalorian” continues to dominate Disney Plus and it’s all thanks to one critical component: Baby Yoda Memes! I’m kidding of course, but his status as an overnight meme icon does help illustrate the critical role Baby Yoda plays. Because memes don’t make a show good, but a job doesn’t make a story great. Without Baby Yoda, The Mandalorian would simply be the story of a faceless outlaw taking bounty pucks and bringing back bodies in carbonite. While that might still be entertaining, it would be comparatively shallow. A great story needs an emotional core we can relate to, and coldly doing your job with no questions asked does not provide that. If the Mando doesn’t care who he’s working for or why, we as an audience have no reason to care either. Baby Yoda provides the audience a window into the heart of our titular Mando, giving emotional weight to his actions that would otherwise be absent if his only goal was covering fuel costs. Just a single dad making his way in the galaxy. Photo Courtesy of Lucasfilm

But while his presence reveals the emotional depth of those around him, it also reveals what the show is lacking: narrative focus. When I reviewed the first two episodes of the series, they gave me the impression that the show was meant to be binge watched as one focused, cohesive story. After watching episode three, that reinforced the feeling that the entire season would focus on the Mando’s desire to protect Baby Yoda, the mystery of where he came from, and why the last remnants of The Empire wanted him. Unfortunately, the three subsequent episodes have shown that I was mistaken.

After escaping The Guild at the end of episode three, the show seems to have forgotten it had a plot. Nothing new has been discovered about who Baby Yoda is and why he is so important, and not a peep has been heard from Werner Herzog’s mysterious Client. We get small mentions to remind us, with random bounty hunters catching up to the Mando and forcing him to move on to somewhere new, but it doesn’t advance the story at all. The biggest issue with these three episodes is that you could rearrange them in any order, and it wouldn’t affect anything about the show. That’s how little impact each one has. In case you forgot, this guy still exists. Photo courtesy of Lucasfilm

Now I understand that episodic storytelling and filler are standard on a series, but that usually applies to a network television show that has a 23-episode season. The Mandalorian is on a streaming service, so unlike a network show, it doesn’t have to worry about people tuning in to the latest episode without having seen anything that came before it. And with only eight episodes in this season, the pacing should more closely resemble a tightly plotted film, using its time to add depth and substance to a single story, not pad it out with shallow side quests. I’m looking forward to the return of Cara Dune. Photo Courtesy of Lucasfilm

But with two episodes remaining, The Mandalorian still has time to stick its landing. While I won’t make any predictions as to how the season will end, there are some things the season would need to accomplish in order to truly work.

Firstly, these last two episodes should return focus to the Mando fighting Imperial Warlords to keep Baby Yoda safe and discover exactly what they want him for. In a New Hope, Luke and Obi Wan didn’t spend an hour of the film jumping from planet to planet to keep the droids away from the Empire, they learned why they were important and did what they had to do to help and fight back. We’ve gotten enough of the Mando running from the people hunting him, it’s time for him to stand his ground , fight back, and uncover the mystery surrounding Baby Yoda.

Secondly, elements from episodes four to six need to be tied back in to the main story so that they ultimately become relevant. If the last two episodes feature Cara Dune, Fennec Shand, and the prison break crew returning, that would give purpose to those episodes that they currently lack. And if they don’t, those episodes could ultimately be edited out and it would affect the narrative in the slightest. They seem to be building to something like that, with a mystery figure finding Fennec in the desert, but it’s too soon to tell. With a droid tending bar, it’s obvious much has changed in Mos Eisley. Photo courtesy of Lucasfilm

Overall, I still love The Mandalorian, flaws and all. While I’m disappointed by how much of it is inconsequential filler, it’s still really good filler. Everything that I praised about the first two episodes is still on display. Well crafted action, characters that show us who they are instead of telling us, and lived in locations that prioritize practical effects over CGI continue to elevate each chapter. Taken individually, each episode is a fantastic standalone piece. But when viewed as a whole, the lack of narrative direction drags down an otherwise excellent series. Here’s hoping it can get everything back on track for a satisfying conclusion.

One response to The Mandalorian is Still Going Strong, but is it Actually Going Anywhere?