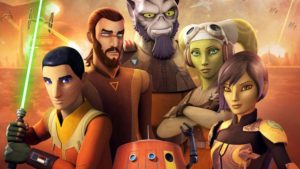 Rumors have been flying around the internet the last few days that there may be a another season or possibly a sequel to “Star Wars Rebels”. If this is true this will be fourth Star Wars animated series since 2008. With the launch of Disney+ this should come as no surprise. Since Disney now has its own streaming platform it can create any type of media or create a sequel to any show it chooses. Is the fanbase ready for some closure to this animated series? There are certainly questions that were left unanswered in the final season and I believe fans are want some closure to the stories of these characters.

There are certain paths that the story could take that would definitely make it interesting. I would love to see Ahsoka and Sabine and their quest to find Ezra. I think seeing Hera and how she is dealing with the loss of  Kanan would be interesting to see as well as how much more she becomes involved in the Rebellion. However the biggest thing I think we as fans deserve is something other that what the show originally did. Upon first hearing of this show and the fact that Dave Filoni was to be involved I was excited because “The Clone Wars” was a huge success. I was slightly disappointed though when I found out it was a show about one rebel cell operating on one planet. True they ended up joining the Rebellion as a whole but a much more interesting approach would have been to make it about several different cells and how they converged into one rebellion. That was one of the reasons I think that The Clone Wars worked so well. It was not a constant story involving Anakin and Obi-Wan. There were many story arcs involving lots of different characters providing for lots of different stories from different points of view. While the series was fairly well received by fans my opinion is to open the stories. Let them be told from different sets of rebels with differing view points conglomerating into one season ending battle. Continue on with previous characters stories but don’t make them so front and center.  We would like to see more tie ins with the movies maybe connecting them more. Maybe a Cassian or Jyn tie in episode. In the latter seasons the voice of Saw Gurerra was done by Forrest Whittaker who later went on portray Saw on the big screen in Rouge One which was a great tie in. Rebels Season Five or maybe just a concluding series to Rebels could be a big hit for Disney if it is done correctly Filloni has had great success with The Mandalorian so far and seems to have the Midas touch when it comes to Star Wars. As far as Filoni being directly involved with the series is unclear at this time. According to a report from comicbook.com he has expressed his views on this “I can’t imagine not being involved in some way with what would happen to her (Ahsoka). Or Sabine, for that matter.” If he continues to be involved with this series it could be a big hit.  With the release of another season of The Clone Wars its obvious that Star Wars fans are looking for more animated series that fill in some of the time gaps in the movies and we can hope with this one be it a continuation or just a separate series will be a huge success.