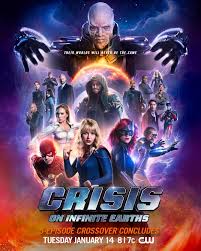 With the recent news that the CW has renewed all their DC TV shows, with the exception of Arrow, what does the 2020 hold for our favorite superheroes and villains?  Anything is possible, especially with the “Crisis” conclusion coming up this week. Needless to say, I’m very sad that this is Arrow’s last season. It’s been a roller coaster ride to say the least, but I’ve enjoyed the journey this show has given me. Stephen Amell’s commitment to the character has been nothing short of spectacular. The cast, past and present has been wonderful and I, for one will miss seeing them every week. Ok, enough of the mushy stuff!

Everyone should know by now that Oliver/Arrow will become “Spectre” in the “Crisis” event and is the only one that can take down the “Anti-Monitor.” Part of me wants Oliver/Spectre to go down in a blaze of glory, taking the “Anti-Monitor” with him. The other part of me wants Oliver/Spectre to some how survive and pop up in the various shows once in a while. I hope for the latter, but figure he might do some kind of “Endgame” snap that resets everything. This would let all the Arrowverse shows continue with their current storylines. For a happy ending theory: Oliver and Felicity reunite somewhere in the universe and live happily ever after!  I only say this because they never explained where Felicity went when she walked off with the “Monitor.” Maybe we are to assume that she just dies, but I like my version better.

Episode nine will debut the backdoor pilot “Green Arrow and The Canaries,” which will take place in 2040. With this being the first season of Batwoman, it’s not certain which direction the series may take. I’m just gonna go with my gut on this one.  Jacob Kane will die trying to save Beth/Alice, either by the end of season one or sometime during season two. I think this event could bring the two sisters together, as far as working together.  In no way do I want to see Beth/Alice redeemed at this point, I want bat-shit crazy Alice to remain intact for a few seasons. With that being said, I do see Kate/Batwoman and Beth/Alice becoming reluctant allies off and on for a few seasons.

Batwoman has the potential to be a great show and bring in some great villains. This may be the show to watch out for in season two. The Pierce family are very disjointed at this point with everyone doing what they think is right in their own way to fight the occupation of ASA.  Jennifer/Lightning has secretly been working with Odell, and has finally come to the realization that something isn’t right. After meeting her two other selves in the “void”, I believe she will realize that her path is to be a combination of her two other selves and fight for the good side. Once she makes her choice, it will be Jennifer that convinces the family that they need to fight together.

After her escape from the “pit”, Dr. Lynn Stewart is shown cooking up something that looks like the green light pills. I’m predicting that she is actually creating a pill that counteracts the effects and addiction that green light causes. Tobias Whale will continue his vendetta against Jefferson Pierce but, may have some added help from either other meta’s in the pit or maybe from some of the “pod” kids.  The character Tyson “Gravedigger” Sykes (Wayne Brady) will soon be making his debut and will no doubt cause some chaos for Black Lightning and the ASA towards the end of the season and into season four. We know Barry/Flash will survive the “Crisis” event, but I think someone close to Team Flash will die by the season finale. It may be a reach, but I think Detective Joe West will die soon. Yes, I know, Nora remembers growing up with him, but she changed that timeline. So I predict that Joe’s death will be a consequence for her action. Iris will become pregnant, maybe not by the end of this season, but definitely during season seven. I think it will be twins. My thinking on this comes from Barry’s comment in season four while speedforcing about needing more diapers and tornado twins. Lastly, I believe Ralph Dibny will find love during his Dearborn case. Ralph has been on the Sue Dearborn case for a while now, so there has to be some kind of payoff. I’m betting he will find Sue Dearborn, and their relationship will flourish during season seven. With Constantine becoming an official member of the LoT team and Brandon Routh’s (Ray Palmer) and Courtney Ford’s (Nora Darhk) characters leaving at the end of the season, it’s time for this show to start getting dark and gritty.  Don’t get me wrong, I love how “campy” LoT is.  However, having Constantine added to the team should change the dynamics of the show. Last season we saw Astra Logue steal coins marked with damned souls from Hell. I believe we will start seeing the worst of humanity from our history to start popping up. This could be what brings a very much needed kick in the ass boost that the show needs.

The departure of Ray and Nora could go one of two ways: 1) both die because of the “Crisis” event or, 2) they go off to live happily ever after. I’m going with the latter so it can always be an option for the characters to come back, even if it’s just a short visit. The friendship between Kara/Supergirl and Lena Luthor has been severely strained ever since Kara revealed her true identity to Lena.  I truly don’t think regaining their friendship will be a quick fix, especially with Lena’s obsession of making the world a utopia.  I don’t see Lena turning into another Lex, but I think it will be harder for Kara to bring Lena back from the brink in the future. Going out on a limb here and stating that I think the Eve/Hope character will pop back up next season as a possible evil brainiac that could cause all kinds of mayhem.

There have been several photos floating around the web showing Supergirl revealing herself in front of reporters. Is this Kara’s way of earning some trust back from Lena? Or is it some kind of dream sequence or distorted reality episode? I’m going with the latter on this one.