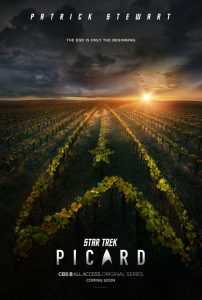 Geek News Now (GNN) put together a panel of five people and ask them five questions in regards to this new year in front of us. We’d like to thank the following people for lending their voice and opinion:

What one thing could cause the “Picard” series to fail?

Debi – I’ve read several articles about the series, and the one thing that is repeated is that this Picard is vastly different from the “TNG” Picard we all know and love. Well, that just scares the shit out of me! I understand that the series takes place 20 years after “Nemesis” and that people change, but don’t change the character so radically that it’s unrecognizable.

Lori – A lot of misconception such as the misdirection of story telling or the visual effects. Things that don’t go with the other shows or movies. They need to have things make sense, not do this show like other fan fictions. From what I have noticed, it reminds me of Renegades and while that was good…. Having Picard do that would not fit his known character, and could be an issue with fans that grew up in the TNG era, etc.

Rory – I’d say Picard could fail due to production costs in sharing streaming series revenue. We haven’t seen it, yet, to give a critical view of its story plot, technical visualization or acting. Some failure concerns mat relate to expectations of viewers: it won’t be TNG, it will have the feel of DSC not TNG, and it may seem too technological different from TNG.

Travis – This might get me a few nasty looks, but one thing that will make this show fail is calling in too much to fan demand. I’m not very concerned about this, but there are just one too many fans demanding explanations for every single detail we’ve been seeing since 2017. I’ve seen fans write off entire episodes based on miniscule details that don’t even matter in the long run of the story. If these episodes start becoming an hour of scientific babble and exposition, I’m gonna get pretty annoyed. Sometimes it feels like that’s all some fans want.

Ash – If it doesn’t get any audience. At the very least, it looks good, but it’s hard to get anything renewed these days if nobody’s there to watch it. In all honesty, I don’t think this fragmenting of the television industry is a very good idea, and that might end up putting people off if they have to subscribe to a whole different streaming service just for the sake of one or two series. The Picard series debuts on CBS All-Access this week.

Should we get a fourth Star Trek movie with Chris Pine or move in a new direction with movies?

Debi – Why not both??? I enjoyed the new Trek movies. Casting was spot on, although I was not totally convinced with Pine playing Kirk, but he won me over with his version of the character. As far as new movies go; how about a Borg origin story or one about Klingons/Romulans?

Lori – Personally, I think a new direction… We have enough of the Enterprise. What about Deep Space Nine Crew?

Rory – I think the Chris Pine JJ verse is played out, and reboots of familiar TOS episodes or film era aren’t going to sustain any interest or sell. The irksome element of radically changing ST history in an alt-universe timeline doesn’t serve the future of ST filmography.

Travis – I absolutely love the Kelvin films, and I admit, I will be pretty sad if we don’t get at least one more. I thought Beyond set up some interesting potential moving forward. I want to see Jaylah brought back, I want to see how they might address Chekov’s situation with the tragic death of Yelchin, and I want to see Pine take the Enterprise out for one more spin. This cast does a great job with these roles, and I would hate to see them just dropped like Enterprise was.

Ash – If there is a fourth movie (I’m not holding my breath for one) then it would certainly help continuity to have the same cast involved. But I guess that’s going to be difficult with their salary demands, as well as the untimely death of Anton Yelchin. Personally I think we could probably do without another movie, but I’ll be first in line for a ticket if one does come along… Chris Pine played Captain Kirk in three films. Will there be a fourth?

Debi – I seriously struggled with the first season of Discovery. Storylines were hit and miss, a few interesting characters. However, I absolutely hated the new fandangled look of the Klingons. I don’t know who came up with that shit, but I hope they got fired. Season two, I thought, was great! Characters were meshed out more and some took an interesting twist, storylines were more interesting, and even one of the Klingons looked normal. Totally looking forward to season three!

Lori – The first season made a bit less sense than the second, but I do wonder how they would try to tie it in more with the others… I say for now that it’s in the middle road, because of it’s uniqueness.

Rory – Star Trek Discovery was a huge success as the first Star Trek streaming series for T.V., or Star Trek Picard and other series wouldn’t even be in production. It has truly restarted a renaissance of small screen Star Trek. Most still don’t get its mystery play format to explore individual characters and humanity’s core values embodied in ST philosophy formation. Season one’s Captain Lorca saga was great introducing this pre-TOS setting. Season two was even better with the Captain Pike storyline, and jump into the 32nd century (3187ish). On the heels of season one of ST:Picard, I see a renewed interest and anticipation for season three of DSC.

Travis – Discovery admittedly still has work to do, but I love it. I believe it has some of the best character development the franchise has seen since DS9, and I am very eager to see where Season 3 will take us.

Ash – It’s okay. I wouldn’t go so far as to say it’s a flop, or (for the moment) fantastic, but I’ve been enjoying it. I’m pretty much still in “wait and see” mode, because I think a lot of the naysayers forget that with the exception of the original series, none of the Star Trek series began more strongly than they ended. And Discovery’s first season was nowhere near as bad as that of TNG. So, let’s give it a chance and see where they end up, yeah?

Star Trek should stick to the small screen. True or false?

Debi – True. Although I love the majority of Trek movies, they just take way too long to come out. Plus with the downturn that the box offices are taking, it may be a smart move financially to stay with TV.

Lori – Star Trek, in most parts, should stick to the small screen or allow movies of the other series in chronological order as homage like was sort of started. Never give false hope and not fall through. I have seen the fan base be split into threes from the new Star Trek remake… some loved it. Some did not and some of those were the ones more into the technical side.

Rory – False! Star Trek should be both small and big screen in its future. I’d love to see a Star Trek Enterprise film while the actors are still available. A film about 7 of 9’s journey before ST:Picard with Jeri Ryan would certainly be a huge draw and interest. I think ST in both mediums has a long and successful future.

Travis – Tricky question. Undeniably, the films are always going to be different in formula compared to the shows they’re based on, and I do think that what some fans want out of each Star Trek movie is considerably harder to accomplish in the big screen. I think Star Trek should continue to experiment in its films. I most of these films to be very fun to watch, and when I go to the movies, that’s the main thing I look for.

Ash – Honestly I don’t think there’s that much difference these days between the quality of television and cinema (only the location is different, and possibly the episode format). But people’s screens have gotten so much larger than when I was a kid, and television is so much more cinema-quality (I often watch “Way of the Warrior” on a big screen like it’s a movie), that this may be a moot point. I have no objections to any of the movies so far. If it’s a good story, and people are willing to pay to see it, then by all means have it in the cinema. (So, I guess that’s a “false”.) The cast of Star Trek: Deep Space Nine, posing for a picture.

Is the future of Star Trek in character spinoffs like “Picard”? If so, who’s up next?

Debi – I think Trek works better as an ensemble cast, that’s just my personal opinion. Of course, I may change my mind after watching “Picard”, only time will tell. If I had my pick, I would go with possibly Worf, a Wesley Crusher series could be interesting – LOL!

Lori – No, because there’s more to tell and I think the writers have lost the ideal of a lot more show and development in teamwork and the roles that is played etc. It’s not easy to do one bit.

Rory – The success of character driven series or additions in spinoffs is assured. Anson Mount as Captain Pike and Ethan Peck as Spock demonstrates that in a call for a new Pike Saga. The same is true of Michelle Yeoh as Emperor Georgiou in a Section 31 series. These are intriguing characters that have generated a fan following.

Travis – Well I should certainly hope not, I would love to see Star Trek give us more memorable characters that weren’t seen before, but that said, I’m not against exploring more characters we know. One of the reasons I’m as excited as I am for Picard is because I’m very excited to see his development break out of the static episodic shell that his character was arguably limited to in TNG. But if it were up to me, if I had to choose a character to base a show on, then move forward with it already, and give Pike a series he so very much deserves, though I also wouldn’t mind seeing Sulu take the Excelsior out in another show.

Ash – I don’t think so. I always thought it would be interesting to explore the aftermath of Romulus’ destruction in a future series. And “Picard” looks like an interesting way to revisit old characters. But I think it might be a bit tacky to focus too much on character spin-offs. Which is not to say that revisiting the old characters after their initial run ended is not a cool idea, for the moment. I don’t know what the future of Star Trek is. But I hope whoever takes the reins can come up with something good. There’s plenty of news out there so don’t miss out! Click HERE to go to our home page.
Mobile users click HERE!