Why Daredevil Season 3 is a Masterful Exploration of Fear, Part I 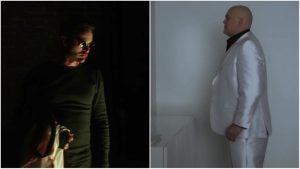 It’s been over a year since Daredevil was cancelled, and with corporate politics preventing the character’s return until at least the end of the year, that news is still heartbreaking. But despite its relatively short tenure, Daredevil proved itself time and again to not only be the best of the Marvel Netflix shows, but one of the best superhero adaptations ever made. With tightly crafted storytelling, gorgeous cinematography, a beautiful original score, and some of the best action scenes in the genre, I could talk all day about what makes the show great. But instead, I want to discuss fear. “In the long run I won, you lost.”   Photo credit: Netflix

***SPOILERS AHEAD FOR MARVEL’S DAREDEVIL***

While superhero films like Batman Begins have explored how the fear criminals exploit can be used against them, Daredevil utilizes fear in a completely different way. Rather than bringing phobias to life with toxins, the show dives into how fear influences our lives and often controls our choices. Fear is so pervasive throughout the show that not even the Devil of Hell’s Kitchen can escape it. From the very beginning Charlie Cox’s Matt Murdock never quite fits the moniker of The Man Without Fear. Now, this isn’t a complaint at all, I think it’s fantastic and adds even more depth and relatability to the character. In an interview with the Chicago Tribune Charlie said it himself:

“Daredevil was known as “The Man Without Fear” and I just thought, “well, I don’t think that’s very interesting.” I don’t think it’s very interesting to watch someone who’s incapable of feeling fear. It also removes from the palate my favorite character attribute, which is courage. If you’re not afraid you can’t exercise courage. So I thought maybe he’s a man with great fear, but despite that fear he chooses every day to attempt to do something about it, and as a consequence he is labelled “The Man Without Fear” by the people who see what he does, rather than what he feels.”

However he might be perceived by others, Matt’s journey is almost entirely dictated by his fears. More specifically, his fear of abandonment. Matt grew up not knowing his mother and having lost his father. Left blind and alone in an orphanage, Matt was found and trained by Stick, only to be abandoned again for simply showing Stick gratitude for helping him realize he was gifted, not broken. But it’s at the start of season three that we find Matt at rock bottom. Not only has he once again lost Stick and Elektra, but as injuries and the loss of his heightened senses sow doubt that he could be Daredevil again, he feels abandoned by God. “Someone once told me that warriors were meant to be alone, that caring about other people would make me weak.” Photo credit: Netflix

​The fear of losing the people we love is something everyone can relate to, and even if you’ve never personally experienced it, we can all understand the fear that the people we care about most might leave us. That’s why Matt spends so much of season three alone, why he acts like a selfish asshole at almost every turn, because he’s reached a point where he no longer feels he can afford to care about people. He’s afraid to let people in, afraid they’ll leave, and afraid his failures will get them killed. With the thought of more loss too painful he turns his back on his friends, letting them believe he’s dead, only telling them he’s alive when he needs to use them for something. He turns his back on God, going so far as turning down a new Daredevil suit because he “outgrew what it stood for.” Matt would rather increase his risk of death fighting in a set of black sweats and a blindfold than put on the bulletproof suit that he associates with being “God’s soldier.” He doesn’t want anyone else to abandon him, so he leaves first. He’s even willing to abandon being Matt Murdock so that he can “let the Devil out,” because unlike Matt, the Devil of Hell’s Kitchen doesn’t need other people. Even as they try to get through to their stubborn friend, the people around Matt are wrestling with their own fears. Foggy struggles with fears of inadequacy, using expensive suits and a lavish lifestyle to paper over insecurities that he’s not as capable of fighting the good fight as his super best friend. Karen’s dark past haunts her, her drug abuse and direct hand in the death of her brother leaving her convinced that she’s a terrible person who doesn’t deserve to be loved. She tries to do good wherever she can because she’s afraid that she doesn’t deserve forgiveness and that her past is something she can never atone for. While Sister Maggie tries to help Matt as much as possible, her fear of the truth hampers those efforts. Hiding behind a bristly exterior, Maggie is afraid of the damage she’d do by admitting she’s his mother, that her fear of having betrayed God led her to leave Jack Murdock and abandon Matt. Even Matt’s memory of his father is poisoned by his abandonment fears, going from cherished role model to deadbeat who valued his pride more than his son. Photo credit: Netflix

Then that fear, the rifts between people, is what facilitates the return of Wilson Fisk.  As Fisk finds his way out of prison and into a five-star penthouse, he preys upon those fears and takes advantage of people’s divisions to pave the way to becoming The Kingpin. Matt says as much to Nadeem when he says “That’s what Fisk does, he finds a weakness, hits it hard.” And it’s through Agents Nadeem and Poindexter that we see the extent to which our fears can be used against us. While Nadeem could have simply been used as a target for bribery, the show went the smarter route and exploited the fear at the root of that deep financial hole: mediocrity. As Nadeem only admits when it’s too late “I didn’t want me son to see me as just an average federal employee.” Fisk leverages his fear of mediocrity, both creating his financial problems in the first place and baiting him with the lure of success so that by the time Nadeem realizes what’s happened he’s served Fisk everything he wanted on a silver platter. Nothing says clean and above reproach like a crisp white suit.  Photo credit: Netflix

But even The Kingpin isn’t immune from the controlling nature of fear. In Part II we’ll explore the driving fear at the heart of Wilson Fisk’s ascension, how he preys on people’s weaknesses to manipulate public opinion, and how Father Lantom’s last words brought Matt Murdock back from the brink and allowed him to succeed.

One response to Why Daredevil Season 3 is a Masterful Exploration of Fear, Part I