Why Daredevil Season 3 is a Masterful Exploration of Fear, Part II 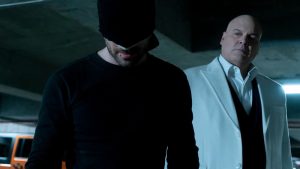 This is Part II of my series about Daredevil season three. For Part I, click here

Of all the characters in Daredevil, the fears and motivations that drive Wilson Fisk are the hardest to pin down. In season one he thought he was doing what he had to for the greater good, that he was The Good Samaritan trying to make his city a better place. But when that view came crashing down, and Fisk accepted the reality of what he was, he didn’t turn from it, he embraced it. As his quest to regain power continued, his motivations felt unclear. According to Erik Oleson, the show runner for season three, Fisk is driven by the fear that he’s unworthy of Vanessa. After being imprisoned, he feels the needs to vindicate himself in her eyes and show that he’s powerful enough to deserve her love. But that only feels half right, because he was on this dark path before they met.

It’s when Fisk tells Dex about his mother, about the hammer, that I finally understood what drove him. Wilson Fisk is afraid of someone else having power over him. Growing up with an abusive father, Fisk lived as a perpetual victim, never knowing what he or his mother might do to set off his father’s wrath. It was in the moment he picked up that hammer, the moment that he killed his father, that he learned that power and violence could prevent anyone from making him a victim again. Wilson Fisk becomes the Kingpin because deep down he’s still afraid of anyone making him feel the way his father did. As Fisk sets his plan in motion, he knows that he has to do more than corrupt the FBI, he has to manipulate public opinion. Seeking to turn people’s ire away from him, he undermines the people’s trust in the media and in their local hero. Setting his sights upon Agent Ben “Dex” Poindexter, Fisk exploits his worst impulses, twisting his fears to drown out the better angels of his nature. Erik Oleson stated in an interview that there’s a “version of Dex who could have been an upstanding member of society, saving people’s lives as a sharp-shooter in the FBI SWAT team. But because of the corrosive nature of Fisk, Dex is instead drawn to the dark side, and there are a lot of otherwise decent people in today’s society who are unfortunately being called to the darkness by people who appeal to their worst impulses.” “You have taught yourself to hide beneath many fictions.” Photo credit: Netflix

Though he’s still struggling with serious mental health issues, Dex has established systems throughout his life to help him live as a normal person, because ultimately what he’s most afraid of is his own darkness, what the worst aspects of his personality make him capable of. It’s why he keeps listening to his old therapy sessions, keeps such a disciplined life, and tries to follow the empathetic Julie’s example as his “North Star.” As disturbing and misguided as his surveillance of Julie is, he’s not acting as a predator. Rather, he’s a broken, emotionally stunted man looking for an example of how to be better. “You’ve fashioned yourself into something the world would tolerate.” Photo credit: Netflix

Then Fisk takes that away, replaces Julie as his North Star, and convinces Dex that his darkest impulses are his true self. The upstanding FBI officer is nothing more than a lie, the honorable sniper a work of fiction. Fisk destabilizes Dex’s life and twists his self-perception until he’s left believing that the only part of him that’s real is the killer. And after setting that killer loose in The Bulletin and Clinton Church dressed as Daredevil, Fisk has effectively undermined the credibility of both the hero who imprisoned him and the public institutions that vilified him. In the act of manipulating people’s fears and worst impulses, Fisk successfully convinces the public he’s the good guy who was simply victimized by corrupt institutions. “I know that most of you find this difficult to accept. That’s only because you’ve been manipulated, poisoned into believing the news media’s fake story that I am evil, that I am a criminal. Quite the opposite is true.”   Photo credit: Netflix

While every single character struggles with their fears, it is only when they face those fears that they can succeed. It is only when Karen admits to Matt that she got her brother killed and that she shot Wesley that she’s able to see there are people who still care about her and still believe she’s a good person despite her worst mistakes. Foggy pushes through his fears to run for District Attorney, drumming up support from local law enforcement along the way. Nadeem bravely faces death to redeem himself, dying so that everyone can know the truth about Fisk’s and the FBI. And as Father Lantom dies, using his last breath to ask Matt to “forgive us,” Matt starts to realize that the solution isn’t to let The Devil out, it’s to let other people in. He seems to finally remember what he told Claire way back in season one: “I know you’re afraid, but you can’t give in to the fear. If you do, men like this win.” The Devil of Hell’s Kitchen finally allows himself to truly be Matt Murdock again and tear down the Kingpin’s empire with the help of his friends.

They might not have a new napkin just yet, but this is the real birth of Nelson, Murdock, & Page. Photo credit: Netflix

The only thing without fear in the entire production is the creative team. I applaud them for giving us a backstory for Karen that was truly terrible, rather than a cop out story of misplaced guilt where she felt bad for doing something heroic. I cannot thank them enough for avoiding turning Nadeem into a cliché who simply broke bad for money. Daredevil season three is one of the most incredible superhero stories ever told, because rather than being driven by CGI battles, indulgent cameos, and spectacle it explores the fears of broken people who we can relate to. Beyond the masks and heightened senses, the world feels grounded as it tells the story of the corrupt and powerful using our fears against us. Not only does this show need to return, every member of the creative team needs to come back with it.

2 responses to Why Daredevil Season 3 is a Masterful Exploration of Fear, Part II