It’s Time to Unleash the Academy 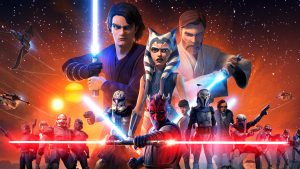 As The Clone Wars comes to a close after seven seasons, tens of millions of Star Wars fans will breathlessly ask one question. ‘What’s next?!’

The thought of a “Jedi Academy” series has been an idea that has been circulating for years. Authors like Jeffrey Brown wrote a book series through the eyes of a Jedi-in-training. Eight books of the series have been published, and another one comes out in April of this year! The books have spent several weeks on the New York Times and Los Angeles Times bestseller lists for weeks.

Star Wars Jedi Knight: Jedi Academy is one of the many video games that follow the idea of a school for the art of lightsaber dueling. It was released in 2003 and received an overwhelmingly positive reaction, which means the thought of an Academy has been around for years!

I have an easy fix. Turn this “Jedi School” idea into a show!

The Mandalorian does an outstanding job with entertaining the Star Wars fanbase, but now, especially now, Lucasfilms is going to need a show for the younger, rebel hungry audience. Online schooling can’t keep them occupied forever. They may want an escape. A Jedi school would just do the trick. Harry Potter followed this premise, and made more than $7 billion in fact. The idea of a character going to a school is something everyone can recognize. When thrown into a bit of danger and fantasy, the audience boomed. 60% of the Harry Potter and the Chamber Of Secrets audience was under 15. Appealing to this age group would shoot profits to the stars. Money would boom bigger than the Death Star explosion.

Lucasfilm can take what they already have. They have books to pull from non-canon books. Use the magic of Jedi Academy author Jeffery Brown, and maybe your lightsabers might be fairly matched with wands.

So—I hear your question. This isn’t canon, but there is a simple way to make it canon. Lucasfilm already has the “Grand Plan” for the High Republic. Why not weave a Jedi boarding school in there along with it?

Imagine cool new weapons like a lightsaber axe and mace. It would sell MILLIONS of toys to fans. The Jedi were successful before the fall of the Republic. This show could care to explain why. The struggle between the Sith and the Jedi had been brewing for hundreds of years. A school or even a camp of some sort would explain why there were so many Jedi. Lucasfilm could layer in so much with a backstory like that. A show that brings in animation, new weapons, characters and story would be amazing. Lucasfilm and Disney never do anything small. There is never just one character, never just one storyline. There is no way this “Grand Plan” will ever just be books—no way. This new series will be pumped out with video games, movies, TV shows, and of course, books. It’s all about making profit. A show that is intertwined with an already rising project would only add to their success.

This project would bring in work for the entertainment industry, as voiceovers can be done in separate rooms. The actors and animators can still practice some sort of social distancing. After the last season of The Clone Wars, there needs to be something new pumping the hyper speed engine to an animated escape.

The Clone Wars streaming show was said to have made $50 million per hour while pouring in $1 million per episode. Another animated series that follows something new while also bringing in characters that fans recognize would be an amazing idea. Simply following the premise of a Jedi training camp or school would definitely add more action figures to the shelves, costumes in the stores, and popcorn in the microwave.

Now, something new, exciting and with a hint of nostalgia doesn’t seem so far, far away.