Calling all Muggles and Wizards! 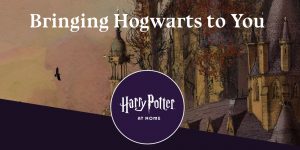 If we didn’t think we needed another version of Harry Potter and the Philosopher’s Stone/Sorcerer’s Stone, we quickly found out today, we actually do.

Wizarding World announced that actor Daniel Radcliffe, Harry Potter himself, will read the first chapter, The Boy Who Lived, of the first book that started it all. Daniel Radcliffe, the original Harry Potter, kicks off the reading at home of the beloved series with The Boy Who Lived.

Hear again about the Dursley’s disgust for anything magical, a cat who appeared to be reading a map, and Albus Dumbledore’s first appearance on Privet Drive.

Not only will Radcliffe read, but there will be additional illustrations in the first chapter during the read-through.

New artwork will be in every chapter and there is even a way for fans to contribute their own by posting their work on @WizardingWorld and using the hashtag #HarryPotterAtHome, but stick to the submission guidelines.

In the coming weeks, chapters will be read by celebrities including:

In addition to hearing the Boy Who Lived for the first or one-hundredth time, there are new discussions for students and parents that include information about the man in the purple cloak, finding strength within your world, and chapter challenges.

For those who prefer audio only, a recording of Radcliffe’s reads will also play on Spotify.