Boba Fett to Be Played by a Familiar Face 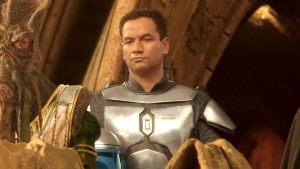 Fans have been hoping for a return from Boba Fett since his seeming demise in Star Wars: Return of the Jedi, with ComicBook.com able to independently confirm that the figure is set to appear in the second season of The Mandalorian. The bounty hunter was originally played by Jeremy Bulloch in his debut live-action appearances, with Star Wars: Attack of the Clones seeing Temuera Morrison playing his father Jango Fett and introducing the notion that Boba was a clone of his father. Since this reveal, Morrison has voiced the character in subsequent releases of the original trilogy of the films and will play Boba Fett in the live-action series. The first appearance of Boba Fett came in an animated sequence in The Star Wars Holiday Special while Star Wars: The Empire Strikes Back saw his live-action debut. Being able to track down the Millennium Falcon and capture Han Solo made him a compelling enough figure, enhanced by his formidable armor. Despite the intense impression he left on audiences, he was somewhat clumsily vanquished in Return of the Jedi when his jetpack accidentally propelled him into the Great Pit of Carkoon where he was seemingly eaten by the sarlacc. Personally Boba Fett has been a favorite of mine since The Empire Strikes Back and having him return to the universe is something I have looked forward to. I especially am looking forward to seeing how he escaped from the Sarlacc pit. The story has been covered in the EU but now we get a story that is cannon.

Those stories, however, were rendered non-canonical when Disney purchased Lucasfilm in 2012. Following that purchase, filmmaker Josh Trank was announced to be developing a spinoff Boba Fett project but those plans ultimately dissolved. Back in 2018, Logan director James Mangold was rumored to be directing a Boba Fett film, another project which was never confirmed and never moved forward.