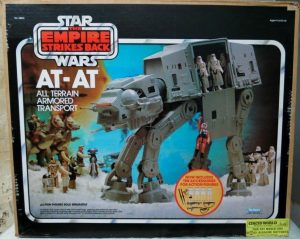 Many of us older fans remember the thrill of going to the toy store and seeing what new treasures awaited for us. This was never more true that when the Star Wars toys were released. Our eyes would glitter at the opportunity to reenact our favorite scenes from the movies or even create new adventures with our favorite heroes and villains. This year marks the 40th anniversary of arguably the greatest of the original trilogy The Empire Strikes Back.  Lets take a trip down memory lane and look at some of the toys inspired by that iconic movie. May 25, 1977 Star Wars is released in theaters and is a surprise and massive hit. Such a surprise that the Kenner toy corporation was not ready with a toy line for the space opera. This, of course, launched the infamous “Early Bird Certificate Package” which included a certificate which could be mailed to Kenner and redeemed for four Star Wars action figures. Then in 1980 The Empire Strikes Back (ESB) was released and the toy maker was ready. A total of  11 figures were released in the first wave of figures along with the original 21 figures from the first movie with flashy new Empire packaging. Wave two was released in 1981 and it saw 10 more figures and nine more figures the in 1982 Wave three hit with nine more figures. There were several changes made to the figures as well. The telescoping lightsaber featured from the first wave of figures was dropped in favor of clip on weapons similar to the various blasters utilized. The notorious use of repaints and remodels started in this line. In particular the Hoth Ice Planet Playset which was merely the Land of the Jawas playset from the original film. As well the Imperial Cruiser vehicle was just a re-dress of the Troop Transport with its electronics stripped. In all five vehicles and seven playsets were made for this line of toys. Lets talk about the ships and creatures. There were four vehicles released with the ESB line, the AT-AT, the Snowspeeder, the Cloud car and Slave I. The Snowspeeder and AT-AT both had power functions. They had cannons the lit up and made noise. The AT-AT cannons actually moved back and forth like in the movie and for a child in the 80’s that was the cat’s meow. We also had a Wampa ice creature and two different variations of the Tauntaun one with a split belly so you could reenact the famous scene on Hoth where Han cut the beast open to keep Luke warm. Finally there were the playsets. Besides the Hoth Ice Planet playset mentioned earlier there was also three more Hoth playsets one of which included a Probe Droid. There was also a Dagobah playset with real Force lifting action ( a button you pushed to make R2 or boxes raise) as well as a Darth Vader Star Destroyer playset. Now I know that his Star Destroyer had a name but Kenner wanted to use a less ominous name than Executor for a toy playset. Well this has been a lovely jaunt down memory lane. For more information on the older toys there is a book by Steve Sansweet called Star Wars: From Concept to Screen to Collectible. Mr Sansweet is an authority on Star Wars collectibles and the Guinness Book of World Records record holder for the largest collection of Star Wars memorabilia. He has his collection on display at Rancho Obi Wan. For the most reliable news related to all geekdom check out Geek News Now.