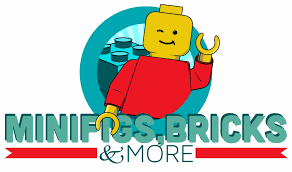 Taking a stroll through on the square of Denton Texas one would see a plethora of different types of eateries, boutiques and stores. The one that is not to be missed is “Minifigs Bricks & More”. This store is not your typical Lego store. Aside from new sets the owner, Anthony Bearden, also deals in used sets. Yes folks, it is a buy-sell-trade store for Lego. There are sets for sale as well as individual pieces and a minifig build station. There is the bulk brick table which you can look through to find that on little piece that you were missing from your set or just buy a bag of bulk Lego to let your imagination fly. I was fortunate enough to have some time to speak with Mr. Bearden about his business. David Furr (DF): How long have you been in business and what inspired you to open this store?

Anthony Bearden (AB): I’ve had an eBay store for a while and have been selling on there for years. That’s when I got laid claim to the name. I even created some minifigs that had not yet been made for the Lego line Like Kit Fisto and was selling them there. In 2007 my family took a trip to Disney World and that was the first time I was able to go to a corporate Lego store. I had the idea then of buying and selling and in 2012 I halted my online selling and started buying inventory for the store and even had a 10’x16′ shed built at my home to help with storage. In August of 2012 I opened at my first location here in Denton.

DF: So what got you started on Lego? How long have you been a fan? AB:I played with Lego as a kid and then in my teenage years I went through my “dark ages”  when they did not matter to me but then in 1999 I received some of the Star Wars sets for Christmas. They were really cool looking on my shelf but when my daughter turned 4 I used that as an excuse to build them and I have been doing it since then.

DF: Do you have a favorite set?

AB: In 1987 I got the 6073 Knights Castle for Christmas. I wanted a castle and the Kings castle was too big so I got this one. My favorite theme is the forestmen series.

DF: What would you say your biggest sellers are?

AB: Minifigs are always big sellers no matter the theme. As far as themes go it really depends on what is popular at the time. When The Lego Movie was in the theaters those were popular sets. Right now its any thing to do with The Clone Wars or The Madalorian. They are both very popular on Disney plus right now and so minifigs and sets from both are in high demand.

DF: You have been in several locations from just outside the mall here in Denton to actually in the mall and now up on the square. would you say that business has improved with each move?

AB: Definitely. We moved to the mall in 2014 and that was when The Lego Movie opened so we were booming. Then as all the malls seem to do it started dying and we felt it was time to move. The square is a tourist area here in Denton so we get the foot traffic. I will say that since the pandemic our sales for in store have dropped off but our online sales are up.

DF: So do you have an online store as well? AB: We do but its mostly for the higher end or harder to find sets and pieces and as I said with the pandemic our eBay sales have been up.

DF: As I look around the shop I notice a lot of toys that are non Lego. I see old X-Men toys, Micro Machines along with various action figures. I assume that this is the “More” part of your name?

AB: Yes. We have noticed that this is a heavily trafficked area and there are no toy stores around here and like I said this is a touristy area so the demand is there. There was a store close to here but it has since closed down so we are trying out that as well.

DF: So do you attend conventions or other venues to get your name out there?

AB: Not so much this year due to the way things are we have in the past done BrickUniverse  and we used to do it five to six times a year. We have also done BrickFiesta  as well. DF:  Where do we find you in the social media?

DF: One last question. What is the craziest thing you have ever purchased to sell?

AB:  Well the coolest thing I ever bought was a set from the 1950’s that still had the wooden box with it. Not all the pieces were there but it was still neat to have. The craziest was though I bought a bunch of the Galador sets. This was an old line that Lego released in 2002  that was such a massive failure that it nearly bankrupted the company.

If you’re ever in the Dallas area and you’re a fan of the brick as I am then make a special trip up to Denton. You can see all the sights as well as visiting Anthony in his store on the square Minifigs, Bricks, and More. He will greet you with a smile and do his absolute best to fulfill all your Lego needs.

If you enjoyed this article and want more about the brick check out my other articles on geeknewsnow.net your online source for the most accurate geeky news.