Not the Star Wars We Wanted, But the One We Deserved 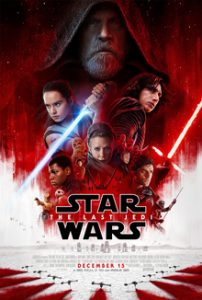 December 15th 2017 audiences caught their first look at the next chapter in the Star Wars saga films, The Last Jedi. This movie quickly came to be unloved by many of the Star Wars fan base and even caused such toxicity towards Kelly Marie Tran, the actress who played Rose Tico, actually left social media to avoid it. With all the negative fan reviews this gem of a movie still managed to be the highest grossing film of the sequel trilogy. So why all the angst against it? This was actually the movie that the Star Wars fans had wanted from the sequel trilogy.

Two years earlier we had been treated to The Force Awakens but that movie it seemed was a rehash of A New Hope. The fans wanted something new and director Rian Johnson delivered just that. The film its self received a 90% on Rotten Tomatoes from the critics but only 43% from the audience. Why the big difference? I believe that due to what is now legends stories people were expecting a certain story line and they didn’t get it. This was a far cry from our typical Star Wars story with just enough to keep us in our universe. There were epic space battles, a hero on a journey trying to find herself, and a brash pilot who was doing what he thought was best for the people involved.  Were there things wrong or that were not loved in the movie? Yes, but that is true of any movie. No movie made is perfect.

For starters the fans were not in love with the idea of Luke exiling himself. So much so that it started #notmylukeskywalker on Twitter. Lets think about this for a moment though. That is exactly what Yoda and Obi-Wan (Luke’s teachers) did. There were other things that could have been done better or maybe not at all such as the whole scene on Canto Bight, or the “Mary Poppins” flight of General Leia. The moment between her, Kylo and the impact on the surviving members of the crew would have been much more powerful if she had died with the rest of the command staff. It would have given drive and purpose to the rest of the cast.

The Canto Bight scene was too long and at times too preachy. Remove Rose’s tirade on the politics of the galaxy and the whole scene with the with the Fathiers (the race horse creatures) and the scene at the Canto Bight casino would have the polished look and feel of something straight out of Attack Of The Clones. The visuals and sound was stunning and when Luke finally faced off against Kylo Ren and the rest of the First Order to me that entire scene gave goosebumps to my goosebumps.

Instead of acknowledging, all the aimless fan theories that fans wanted to be true, Johnson told a original story that challenged how we cast Star Wars‘ heroes and villains. Rey is desperately seeking guidance, and instead of finding it in Luke Skywalker, she finds him consumed with his own bitterness. She does, however, find it in the least-likely of places: Kylo Ren. Together, their Force-connected conversations resulted in a stunningly complex rounding out of the new trilogy’s most compelling characters. Rey’s parents? Simple paupers who in no way factor in to her place in the galaxy’s new conflict. Kylo’s mask? Shattered against a wall after being mocked by his master, Snoke — a character who was elevated by such intrigue and mystery in The Force Awakens that it was nothing short of amazing when he was surprisingly sliced in half with out any revelation as to who or what he was and it made The Last Jedi all the better for it.

Just because it is not your typical Star Wars movie does not mean its a terrible movie. If there were things about it you did not like about it that’s fine but it does not make it a bad movie. Even Empire Strikes Back, which is arguably the best of the movies, had parts that I didn’t like. You need to watch this movie knowing that it is not Empire and that its a new direction and a new adventure for our new cast of characters. One of the lines that continues to stick out to me in the movie is “It’s time to let old things die. Snoke… Skywalker… the Sith… the Jedi… the rebels. Rey… I want you to join me. We can rule together and bring a new order to the galaxy.” This to me was saying that Star Wars has moved on and is growing and changing. Yes the Original Trilogy was amazing and we all grew up with it. We were excited when the Prequel Trilogy arrived because there was finally some new movies we could enjoy and share with our kids. Now the Sequel Trilogy is out and it is designed for a new generation of Star Wars fans. Think of it this way you now have something in common with the younger fans now, not a love of a certain trilogy but the love of Star Wars as a whole.

One response to Not the Star Wars We Wanted, But the One We Deserved