Inconceivably Fun: A Review of The Princess Bride Fan-Film for the World Central Kitchen 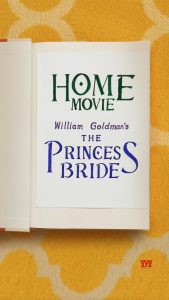 In late June, rumor of a remake of the classic movie, The Princess Bride, starring Joe Jonas (Camp Rock, The Jonas Brothers) and Sophie Turner (Game of Thrones) hit social media. The people who frequent various social media sites reacted to this news with the  eloquent demeanor we’ve come to expect. Something like…

“Really? What warthog-faced buffoon approved this project?” I yelled to no one of consequence, because the original 1987 movie, directed by Rob Reiner, had everything it needed to be a perfect movie: fighting, torture, revenge, monsters, escapes, the miracle of true love, and a cult fan following that’s still going strong after more than three decades.

Pretty good for a movie whose marketing department tanked its promotion, but I digress.

As lovely as Joe and Sophie are, no one could compare to Westley (Carey Elwes) and Buttercup (Robin Wright), nor should they, which made me think who would want to cause this kind of ultimate suffering?

Come to find out, there was no need to throw myself into the Pit of Despair. In fact, the announcement of the “remake” of The Princess Bride was greatly exaggerated.

Founded in 2010 after the earthquake in Haiti, WCK mission statement is using “the power of food to heal and strengthen communities through times of crisis and beyond. WCK has transformed the field of disaster response to help devastated communities recover and establish resilient food systems.“

An incredibly worthy charity helping those who are strained to feed their communities after disasters and training many in the culinary arts and skills in underserved countries so that they may continue the work long after the WCK volunteers move on.

Still, how did rumors of a beloved movie’s remake become part of this amazing organization?!

An avid fan of the film, Reitman wanted to do something to help those in need during the lock-down. An idea came to him. What if he shot one of his favorite movies in his backyard using whatever props and costumes he could gather? Would others be interested in participating in the home movies as well?

He put a call out to friends in the business to contribute a scene in order to raise money for Chef Andrés’ charity.

The project would launch on the new app, Quibi, a short-form, vertical video platform that had “quick bites” or video chapters of movies or episodics, no longer than ten minutes each.

My guess is Reitman’s original goal may have been to have enough footages for two maybe three chapters. Make an abridged version of the movie and it would still raise some money and help others.

I mean who would have proper props, costumes, and settings at home to re-enact scenes from an iconic movie as The Princess Bride, especially during a time of social distancing?

What kind of celebrities would even want to be a part of such a project?

Turns out, A LOT. Over eighty, including Rob Reiner, the original director of the film, his legendary father, Carl Reiner as well as Fred Savage, who first played the young man listening to his grandfather weave a beautifully perfect story, and Cary Elwes, the original Westley.

Actors were willing to dig into their kids’ costume boxes, grab stuff on Amazon, use kitchen utensils, and raid their own closets for crowns, makeshift swords, lightsabers, and pirate themed puffy shirts.

BTW-there are a lot of people in the entertainment industry with puffy pirate shirts laying around.

By the time everyone’s segments were completed, Quibi announced the project covered the ENTIRE movie which were divided into ten chapters.

The home movie would have a wide range of actors, gender switches, too many costume improvisations to name here, a Tolkien reunion, and a bittersweet curtain call no one saw coming.

Great, now you’ve got the footage. How do you seamlessly flow from one scene to the next with different characters, settings, and props?

Would it give the original the respect it deserved or would it crash and burn like a pile of filth, refuse, muck, or slime?

To say I didn’t enjoy this would make me a LIAAAAR!

I enjoyed the hell out of it so let me explain…wait, that might take bit too long. Okay, let me summarize.

It’s a true tribute, no a parody, to the film and all those who love it.

In fact, the variety of sets and diversity of actors became a wonderful guessing game as each scene unraveled. Like a bunch of small gifts you unexpectedly find for your birthday, each new chapter brings new joy and appreciation. To realize the Princess Bride community is far wider than I could have ever realized.

Seeing who played what part delighted as much as reciting the movie lines of a film we’ve all seen more times than we care to admit.

A project like this doesn’t happen everyday. With such a diverse group of actors who wished to participate, it illustrates how a great story told well, will reach many hearts and be the true escapism that all of us desperately need right now.

How a sweet movie can bring us all together, even virtually.

Each chapter has the charm of their haphazard costumes, the make shift settings, and the Lego re-enactments, but the different actors did their homework as the choreography of the original was kept in place. This especially held true in the sword fight between Inigo and Westley.

(If you want a great explanation in the work that went into that scene and a behind the curtain list of fabulous stories, check out Cary Elwes’ book, As You Wish.)

The original score played on what sound like pre-school instruments, completes the tone of the film.

To circle back, those rumors of Joe Jonas and Sophie Turner playing Buttercup and Westley?

True, but bit of hilarious information may have been left out.

They do play said characters, except they gender switch for the scene in the fire swamp and no, don’t skip to the end of this clip.

A pregnant Sophie (Westley) battles the ROUSes, played by their pet Corgi, Percy, who’s sporting the “cone of shame”, as Joe takes on the role of Buttercup and all her limited ability to defend herself.
[Noticed the subtle (or not so subtle) sneaking of a dog treat to Percy. ]

In the ten chapters, multiple people step in to play the different characters, sometimes switching mid-scene. The supporting players include kids and pets as well as trash bags.

There are fantastically fun bloopers at the beginnings of each clip and even funnier improvs with props. One specific example is in the scene with Inigo Montoya (Javier Bardem) vs Count Rogen (Brian Cranston) as Inigo (Javier) uses a different items as a sword for every cut-a-way.

To keep track with all the players, there’s a comparison still from the 1987 movie along with the actors’ names that are posted next to the footage.

With all this work and so many participating, did it help with the fundraising?

You bet it did. To date, over 20 million meals have been prepared and served.

As much as I and my family enjoyed the entire project, the final scene really punched me in the chest. Not only was it a lovely father-son moment, it was the final curtain call for a legend.

Carl Reiner was the final actor to play the grandfather, reading the last bit of the story to his “grandson”, Rob Reiner.

Rob says, “Grandpa. Maybe you could come over again and read it to me tomorrow.”

Carl looks at the camera and says those three perfect words, “As you wish.”

The elder Reiner passed in his sleep, four days later, at the age of 98. An icon in TV and film has given us all one last gift.

Needless to say, I thoroughly enjoyed this amazing endeavor of The Princess Bride, Home Movie project. It paid beautiful tribute to the original film and the cast, but it’s a great way for the family to see a beloved movie in a whole new way.

Check out all ten chapters on Quibi now or if you’ve never seen the original (INCONCEIVABLE!), it’s on Disney+.

So, what scene are you looking forward to seeing in the tribute and what’s your favorite line from the Princess Bride?

Write your answer in the comments below.