Beyond the Grave: A Walking Dead Panel Recap 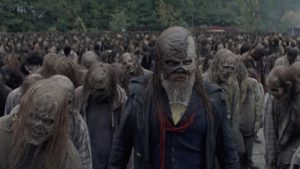 If there’s one thing that’s hard to keep down, it’s zombies. COVID-19 did its best, but The Walking Dead is back! Season 10 was left without a proper finale and fans have been patiently waiting. Now the wait is finally over!

Panelists revealed the Season 10 finale will premiere on Sunday, October 4 at 8pm CST. Fans have waited this long. What’s a couple more months? In addition to a proper finale, we’re also getting another six more episodes to extend the season. These episodes will air early 2021 if all goes well. Of course, this turns the “finale” into more of a semi-finale, but who cares?

When asked if season 11 would be airing with a different schedule, executive producer Angela Kang revealed that they have not been able to start production yet. This means that season 11 will be postponed until 2021 at the very least.

Nothing to Fear but the Walking Dead

Season 5 of Fear the Walking Dead concluded back in September 2019. Fans watched as beloved character Morgan was shot in the chest and left for dead and a group of walkers were closing in on him. Whether he really is dead remains to be seen. The cliffhanger left many fans begging for answers, and for Morgan to not really be dead. Those answers, and probably more questions, will be provided in the upcoming sixth season.

Cast members and show producers were excited to reveal the trailer for the upcoming season. We will see the return of Virginia and the fans are promised that we will see new dimensions of the cheery villain. We may even get to see a rare vulnerability in her.

Production was slowed due to the pandemic and according to Andrew Chambliss, it’s been a waiting game. The first half of the season was nearly completed before the lockdowns. Now they have finished writing the season and are just waiting to see what happens so everyone can come back safely. He stated he is excited to see where the back half of the season is going to go, but he is also antsy. He joked, saying “Ian [Goldberg] and I acting everything out isn’t as much fun.”

At the very least, we’ll get the first half starting October 11 at 8pm CST on AMC.

Finally, a new series was revealed today. The Walking Dead: World Beyond is a two-season limited event set to premiere on October 4 at 9pm CST just after The Walking Dead season 10 finale.

The series looks promising! It is set 10 years into the zombie apocalypse and follows a group of teens who were raised during the events. They are encouraged to be brave and fight for the world that is out there beyond their walls. To me, the teaser was reminiscent of the new Ghostbusters teaser in that it focuses on the children of the survivors. These are the first-generation children of the apocalypse. They could not have been much older than 4 years when the zombies came. They know how walkers (now called “empties”) work, but have never actually killed them. Now they must grow past their “book smarts” and apply their knowledge to take back the world.

In the teaser, we also see a new group of baddies appear. They drop in from a black helicopter with a 3-ring symbol. It was mentioned that this symbol is the same one seen when Rick Rimes was taken away. The plot thickens! The group is led by a woman named Elizabeth. Does she know where Rick is? If she does, she wouldn’t tell you. If she tells you, you shouldn’t believe her.

You’ll just have to watch to find out.

What do you think of these reveals? Are you excited for more Walking Dead? Let us know your thoughts! Follow us on Facebook and Twitter and tell us what you think!

As always, stay geeky my friends!