Marvel Comics has some big stories and events coming to store shelves in the near future; and a handful of representatives from the company opted to present this news to you the Marvel fans! For about 45 minutes, the panelists — introduced by Editor-in-Chief C.B. Cebulski — shared premises of stories which are on the way and sure to excite! 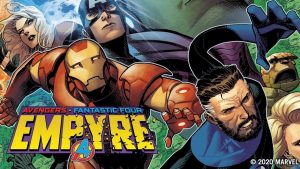 What will come of the rising conflict within the Avengers/Fantastic Four crossover saga “Empyre”? Picture credit to flickeringmyth.com

First up was a discussion — moderated by Marvel Executive Editor Tom Brevoort — on the Avengers/Fantastic Four crossover saga “Empyre”; a story I’m excited for in which the Kree and the Skrulls, after millenia of war, co-operate under one banner and one ruler: Hulkling, the new young Avenger. But “Empyre” writer Al Ewing questions if Hulkling is to be a figurehead for the powers-that-be, or a real king in waiting? The common enemy is the Cotati, a race of plant beings, who shared a planet with the Kree but were massacred by the latter and now desire revenge across the galaxy. The seed of war has been planted!

Three characters important to the story: Jo-Venn, N’kalla, and The Profiteer. The first two are, as fellow “Empyre” writer Dan Slott says, the Kree Chronicle of Blood and the Skrull Requiem of the Shapeless Soul; meaning they are the living histories of the Kree/Skrull conflict. As for The Profiteer, she stands to gain or lose profit as she provided the weapons for both sides.

Whatever happens in “Empyre”, the outcome is to be world-shaking! Slott promised by the end we will see major ramifications for the Fantastic Four, for the Marvel cosmos, and for the Marvel Universe itself! The story is already two issues into events. 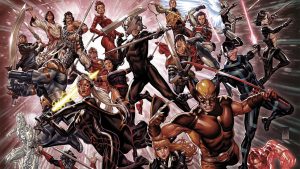 Players in the drama that is “X of Swords” from Marvel! Like Wolverine needed a sword!? Picture credit to gamesradar.com

Next discussion, Jordan White (Senior Editor of X-Men) moderated for writers Tini Howard and Gerry Duggan as they discussed the epic 22-chapter X-Men crossover story “X of Swords” which occurs after groundwork laid in the past year with the “Dawn of X” story-line. The Ten of Swords is notably from Tarot cards and Howard said this is the end of the suit and the journey and does not end well.

“It comes out of a lot of my love for a lot of things people have seen in ‘Excalibur’; the idea of magic not just as a thing that lets you fly around and shoot fireballs or whatever, but magic as the idea of a cultural practice and the ideas of, like, being a knight of something; being representative of something, you know what it means to hold a sword and fight for something.” said Howard.

“X of Swords” starts in September and runs all the way through the end of November. 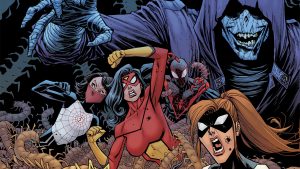 Who is the mysterious Kindred (back)? What villainy does he have planned for Spidey and friends? Picture credit to gamesradar.com

Then came Marvel Comics Executive Editor Nick Lowe moderating two different discussions: one for “Amazing Spider-Man” and another for Marvel’s new limited series “Werewolf by Night”. Lowe was joined first by “Amazing Spider-Man” writer Nick Spencer and artist Mark Bagley. Things are about to get bad for the web-head: panelists discussed the return of two villains; one in the “Sins Rising” arc and the other in “Amazing Spider-Man” #850. The returning villain in “Amazing Spider-Man” #850 is none other than The Green Goblin! The other return is the Sin-Eater; an old Spidey foe resurrected by Kindred — a mysterious, bandaged new villain. How ol’ Gob-y factors into the Sin-Eater and Kindred story, Spencer says readers will just have to read and find out; but Norman Osborn is apparently a major player in that story! 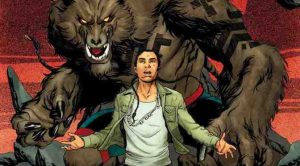 Finally, Lowe moderated for Taboo (of The Black-Eyed Peas) and Ben Jackendoff who write for “Werewolf by Night” which is about a Native teenager named Jake who becomes the next incarnation of said titular character. Taboo and Jackendoff come to this project after writing a one-page Red Wolf story for Marvel Comics #1000 and it looks very interesting! The whole thing has a nature vs. technology vibe in how Jackendoff and Taboo describe it; Jake in his werewolf condition represents mysticism of Earth and fights against Dr. Eve Mackowski and her cybernetic creatures. The story goes on sale in October!

This panel left a lot of excitement for me and I hope to see what happens next in the stories the panelists promised! Life is never easy in the Marvel Universe; it looks like things are about to get very complicated, to say the least. I hope to see our heroes emerge triumphant, but am prepared for anything. As the saying goes: “make mine Marvel!” ‘Nuff said!