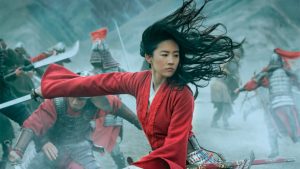 Update- On August 5 Insider.com confirmed that “If you purchase Disney’s live-action “Mulan” for $29.99 on Disney Plus, it won’t be a one-time rental.  “Once purchased, Disney+ subscribers will have continuous access to the film for as long as they remain subscribers to the service,” a Disney Plus representative confirmed to Insider.“

Today during the Walt Disney Company Reports Third Quarter meeting Disney CEO Bob Chapek announced that due to COVID19 Disney has decided that they need to look into options that will allow them to release new content in a safe and timely manner.  The first confirmed movie to be released in this new manner will be the Live-Action version of Mulan.

Originally scheduled to release on March 27, then pushed to July 24 then August 21 and finally pushed back indefinitely, Chapek announced that Mulan will release on September 4 on a “Premiere Access” basis on Disney+ for $29.99 and in-theater in select Global markets. When asked if this would be a new business model, Chapek stated at the time Disney is hoping this will be a one time event.

An International Direct to Consumer offering under the Star brand that Disney bought from 21st Century Fox as part of that 2019 mega-merger will be launched in 2021. Content will include direct to consumer options from ABC, Fox Entertainment, FX, Freeform, Twentieth Century and Searchlight.

Chapek stated “In many markets, the offering will be fully integrated into our established Disney+ platform from both a marketing and a technology perspective and it will be distributed under the Star brand which has been successfully utilized by the company for other general entertainment platform launches, particularly with Disney+ Hotstar in India.” This offering will be available in many markets integrated into Disney+ and distributed under the Star Brand. Pricing, shows and where this offering will be available will be discussed in upcoming Investor Meetings.

Visit our Twitter and answer our poll question about if you plan on watching Mulan on Disney+ Premiere Access. Numbers wise Variety shared that “The Walt Disney Company was brutalized by the coronavirus pandemic, which shuttered its parks and delayed the release of its films, setbacks that nearly sliced its revenues in half during its most recent fiscal quarter.

Revenues fell 40% to $11.7 billion, while diluted earnings per share for the quarter decreased 94% to 8 cents, falling from $1.34 in the prior-year period. Those revenues missed expectations, even if the adjusted profit was a pleasant surprise for investors. Wall Street had projected revenues of $12.39 billion on adjusted losses per share of 63 cents. The collapse of the theme park business was largely to blame, resulting in a $3.5 billion hit to operating income and a loss of $2 billion.

Disney has taken a massive $4.9 billion write-down on the value of its international channels, reflecting the COVID-19 slowdown in advertising and the global shift away from linear viewing to streaming platforms. Disney inherited more than 200 channels around the world through its purchase of 21st Century Fox. The company also recorded $94 million in severance charges in relation to restructuring at the channels.

Disney’s film income dropped 55% to $1.7 billion and segment operating income fell 16% to $668 million. That’s not unexpected given that the studio released no films theatrically compared to the prior-year period which saw the release of such hits as “Avengers: Endgame” and “Aladdin.”

The company’s cable arm saw revenues for the quarter fall 10% to $4 billion while operating income increased 50% to $2.5 billion. The rise in operating income was due to lower programming and production costs at ESPN, which, after all, had very little content it needed to produce given the sports shutdown.

Broadcasting revenues for the quarter increased 12% to $2.5 billion and operating income increased 55% to $477 million. Savings on the production front helped off-set declines in advertising.

Operating losses increased at Disney’s direct-to-consumer and international segment, rising from $562 million to $706 million. Revenues increased 2% to $4 billion as Disney Plus and other brands continued to add customers.“