Shock Poll Results: No To Brie Larson As Samus! 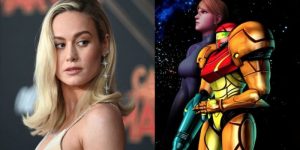 Fans have spoken! By a close majority, they made it known in our weekly Shock Poll they wouldn’t go to see a “Metroid” movie with actress Brie Larson cast as its’ lead character: Samus.

Larson, known for her role in Captain Marvel (2019) as the titular character of the same name, has met mixed reviews from fans; regarding her approach to said character, she is either loved for being another strong woman lead in a male-dominated movie industry or rejected.

Samus surprised video game fans decades ago at the end of her action-packed side-scroller on the Nintendo Entertainment System when the game revealed this soldier-of-fortune from the stars was, in fact, a woman; and not the usual muscle-bound He-Man type of a man perhaps expected of a lead action character. Brie Larson as Captain Marvel; the space-gallivanting heroine of Marvel fame! Fans have said no to her playing the role of fellow space-heroine Samus. Picture credit to gurugamer.com

Of all potential actresses presently working, we asked if Larson would be enough to draw folks out to theaters to see Samus doing what she does best kicking butt and fighting aliens; and out of the 1,539 votes 55% voted “No” to the idea. Well, majority rules and we’ll have to dream of another actress as a potential Samus! The fan responses on our Facebook page varied:

“Captain Marvel was ok but she’s just dull and way over hyped like Kristen Stewart not much acting and more just reading the lines…” — Kendall Kernohan.

“They should get the girl from kickass” — Jonny Pepperston.

Of course those who voted “Yes” to Larson as Samus felt differently than complaints against her acting ability.

“Why do people say she can’t act or has no emotions, have they only seen her in Captain Marvel where she plays someone who is told that emotions are bad. Watch her in Unicorn Store, Free Fire, Room, Glass Castle.” — Stefan Davenport.

Like what you read? Subscribe to Geek News Now! Future Shock Polls can be found on our Facebook page; jump over now to vote in the latest poll and make your voice heard!