Dracotok: The Best Tiktok Trend of 2020

Star Trek: Lower Decks premiered August 6 on CBS: All-Access.  The idea for an animated comedy was great… execution… not so much.

It starts with a classic story. A dreamer on the lower decks of a starship yearns for more. You’d think Disney wrote this. However, the pilot episode deviated from the character we assumed that we were going to have as the lead to focus on someone else.  In the less than a half hour we had so many different character plot lines it made my head spin. We saw the poor ensign, who the captain can’t even call by the correct name, and his friend. Then, it switched to the rookie that just dreamed of being on a starship. To then switch to two poor lovers that you can’t decide if they really like each other or not after maybe a couple minutes. Back and forth between the story lines before you could figure out what you were watching.

The first episode left so much more to be desired.  In it we saw what could only be their attempt at a zombie apocalypse and definitely not a good one either. It felt like they took inspiration from  Spider-Man decided to add Zombies and Star Trek with a very lame Star Wars reference. If you reference sand and it being irritating then you’re leaning too far towards Star Wars. Even someone that hasn’t watched Attack of the Clones knows of the sand reference.

At times I struggled to see where the main story line was! I still haven’t figured out who the primary character and story line is. It bounced around between three different plot points you didn’t have time to figure anything out. Was it more about Boimler, Mariner, Tendi or Rutherford? You never figure that out in episode one.

The Zombies were created by… A BUG BITE! Very much like Marvel’s webbed hero except he got powers and they got the desire to eat flesh. Only difference, this time there is an antidote… ironically the saliva of a spider cow that likes to use humans as a pacifier. Also the zombies spit black goo at people before they turn them by… yes… biting them. Very cliche in terms of zombie story lines.  The zombie thing is very over done. 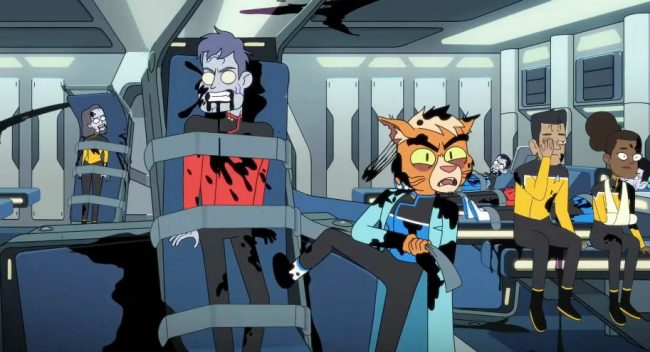 The easter eggs were obvious too.  They also make a nod to Star Trek VI with the Romulan whiskey that Mariner is drunk on which is a nod to the Romulan ale.  We also see this as a reference to TOS and the reference to Scotty and the mystery green drink. There’s even the bat’leth in reference to The Next Generation. The episode was practically throwing up easter eggs.

So with all the bouncing around from story line to story line and the over done ideas I would have to rate this show a 3 out of 10 phasers set to stun.

Episodes one and two are now streaming on CBS All-Access.