The DCFandome online event hit the ground running on Saturday by starting off with the stars and director of Wonder Woman 1984 and the newest trailer that finally shows Wonder Woman and Cheetah in combat.

Wiig laughed, “Most memorable moment was when we (Wonder Woman and Cheetah) were fighting and she pulled my wig off.”

“It got stuck in my cuffs!” Gadot added. 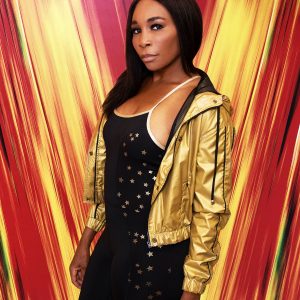 The panel threw us a couple of surprise guests when one of the fans, Venus from Miami, popped up on the screen and it was none other than tennis extraordinaire and Wonder Woman junkie, Venus Williams.

Sporting a gold jacket with the Wonder Woman emblem on the back, Ms. Williams asked, “Who would win in a tennis match between Wonder Woman and Cheetah AND would they put aside their differences enough for a game of doubles?”

“Oh, I think Cheetah would win in tennis,” Wiig answered. “I mean, she’s fast and I think she would win.”

The surprise guests didn’t stop there.

Who else popped into the panel?

None other than the original TV Diana Prince but Lynda Carter.

With all the fantastic discussions in the twenty-five minute panel, one of the big questions of will it be in theaters or released online was answered.

“We’re going to release it in the theaters,” Director Patty Jenkins announced. “We all worked so hard to bring something would be a big visual spectacular. We’re going to stick out and we believe in putting it in the cinema.”

You can watch the entire panel discussion on YouTube.

What are you looking forward to the most in the newest Wonder Woman movie?

Drop your comments below and check out the 5 Things I Wonder about WW84.