Panel Discusses How To Save Your Campaign From The Murderhobo Phenomenon! 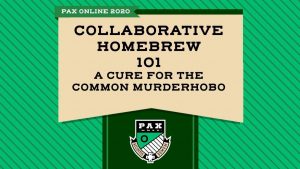 “Collaborative Homebrew 101: A Cure for the Common Murderhobo”… It’s a PAX Online 2020 panel which both game masters and your average “murderhobo” type player would do well to watch and pay heed!

Screened live on Twitch and YouTube on Sept. 12th, the panelists explored potential aspects of why players will go the murderhobo route in roleplaying games; citing specifically that this type of player doesn’t feel a reason to be invested in the plot elements of the campaign.

For those that are unfamiliar with the term, a “murderhobo” is a player and their character who essentially spend the campaign killing recklessly for their own amusement; often to the annoyance of the other players and the game master who spent butt-loads of time carefully preparing and crafting the scenarios and their possibilities only to have them go awry due to the murderhobo’s actions.

Well, the exercise which the panelists put on before their viewers shows a way to possibly fix that. This is not a usual route taken in your average roleplaying game; traditionally, it’s the game master who creates the world and the adventure aspects for the players to go through. But by having each person involved in the development of the campaign and its world, this could generate a feeling of investment within them to see the specific elements of the campaign followed through instead of recklessly plowing through it!

As the panelists created their world, Davis noted that giving the players the chance to develop their own adventure hooks could give the game master the opportunity to better see just what motivates their players: combat, roleplay, acquiring gold, etc. The team produces a whole world of adventure seen in their map (bottom right)! Picture credit to YouTube (via PAX channel)

“Remember that whatever your players are giving you is all information.” said Adam Johns (Executive Director/Therapeutic Game Master with “Game to Grow”) in response. “So when a player does want to, like, attack things and burn the place down, that might be that they’re really starving for combat! And you need to toss them a combat so that they can dive in and fight some stuff to feel powerful and feel epic. And all that is good information that you can always use to help create the campaign and the plot-line that’s going to be the most engaging for the players.”

Unfortunately, we’ll never know how this panel ended… three quarters of the way into the hour, the pre-recorded video suddenly started back at the beginning and replayed from there until the hour was over and the next panel was up! I’d be disappointed, *but*… they did make their point clearly enough and that’s really all that matters.

If you’re a game master or a campaign player and you are tired of the murderhobo-ing in your game, I highly recommend watching this panel discussion and incorporating its collaborative exercise. Give all the players a reason to feel invested in what happens instead of drifting along listlessly killing at will for fun!

Check out the official schedule for PAX Online 2020 and see more panel discussions! While you’re at it, subscribe to Geek News Now and give it a like on Facebook!