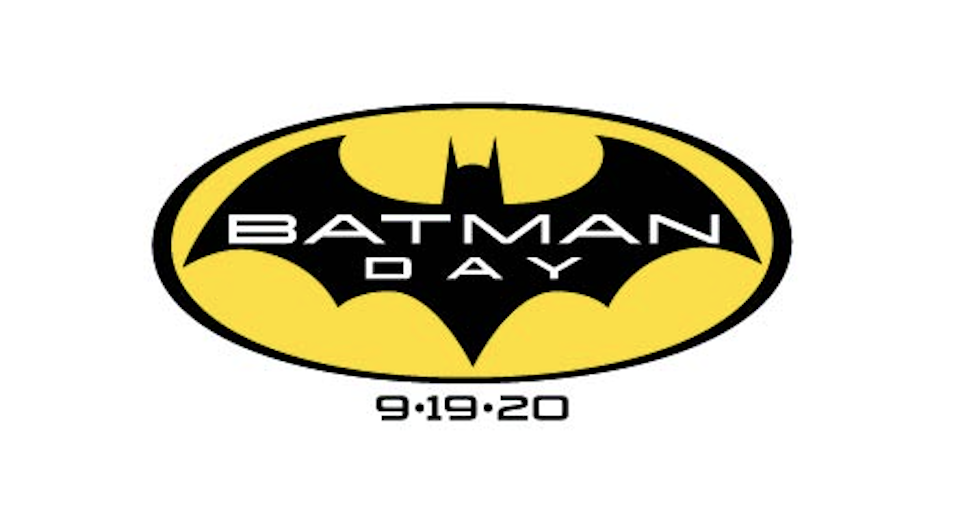 Picture it: you’re sitting down watching Batman (1989)… A figure clad in a black armored suit resembling a bat has just pummeled two muggers and currently has one dangling over the edge of a tall building. 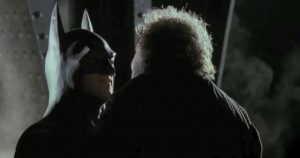 Batman warns a mugger about crossing his path… Picture credit to batman-news.com

In a cold voice, this dark figure says to the mugger: “I’m not going to kill you… I want you to do me a *favor*. I want you to tell all your friends about me…”

“What are you!?” the mugger shakily asks.

The dark figure grips the mugger closer by the neck of his shirt, looking him square in his eyes as he answers: “… I’m *Batman*!”

It’s at this point that audiences cheer! The first seriously-played interpretation of Batman with this first appearance in the film and one simple but rousing line which has become tradition for most every new Bat actor to say at least *once* in the role… “I’m *Batman*!” And this epic moment in movie history was performed by none other than actor Michael Keaton!

But here’s the thing… Keaton wasn’t exactly expected by many Batman fans to ever make such a grand moment possible; let alone carry a serious Batman movie. No, there were a lot of fans back in the day who expressly voiced their displeasure and concerns about this casting choice. 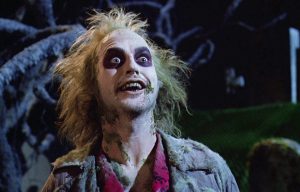 What you’ve got to remember is that before Batman, Keaton was mostly known for his work in comedies! He starred in such films as Beetlejuice (1988), Mr. Mom (1983), Johnny Dangerously (1984), and Night Shift (1982)… People were used to expecting this sort of performance from him. So you can probably imagine the fans’ worries that Warner Bros. was going to take their beloved Batman and turn his story into another farce much like that of the 60’s T.V. series starring Adam West.

Fans did not want that to happen, PERIOD! So, in the days before the internet could supply a means to voice fan disapproval, they wrote them out directly to Warner Bros. and the story goes that said company received upwards of 50,000 letters. Long-time Batman movie producer Michael Uslan even voiced his concern to director Tim Burton, saying: “He’s a comedian. I mean, what’s the poster going to say? That Mr. Mom is Batman?”

Oh, the tension and expectation from fans was indeed high! 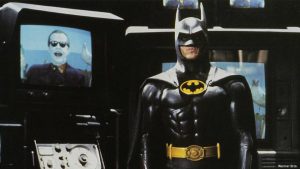 In the Batcave, our dark avenger monitors the activities of the devilish Joker! Picture credit to gmanetwork.com

Then… when filming for Batman wrapped… along came to theaters a teaser trailer for the upcoming film. All I can say is this: the fans went *nuts* when they saw it! Not out of anger or disappointment, but out of sheer excitement! Yes, the teaser worked so well in selling the movie (and Keaton) that fans would reportedly buy full-priced tickets to movies *just to watch the Batman trailer again and again*!

What’s more, fans and many critics praised the film and Keaton’s portrayal of the Dark Knight himself! The following critique about sums it up: 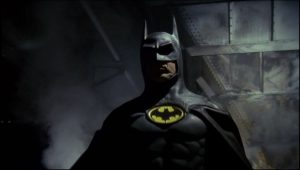 Batman shrouded in darkness as he hunts down enemies of justice! Picture credit to syfy.com

“For Batman purists, Michael Keaton was an upsetting choice, but it’s a choice brilliantly redeemed in realization. What Keaton brings to his characterization of both Batman and his millionaire-playboy alter ego, Bruce Wayne, is a quality of coiled concentration, a wary vigilance… This is a true star performance, subtle, authoritative and sexually vibrant.” — Hal Hinson (Washington Post).

Honestly, Keaton’s Batman is a standard by which every subsequent Bat actor is judged, and for good reason! His Batman is so beloved by fans that he’s expected to make a return somehow in the upcoming movie The Flash (2022); news which was, let’s say, happily received. If you haven’t seen Keaton in Batman, I highly recommend doing so ASAP! 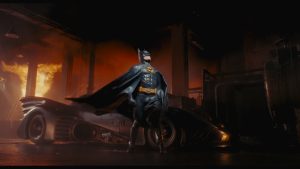 Batman beside his ride of choice: the Batmobile! Picture credit to doblu.com

Now, if you’ll excuse me, I plan to do exactly that as part of today’s celebrations! Happy Batman Day!