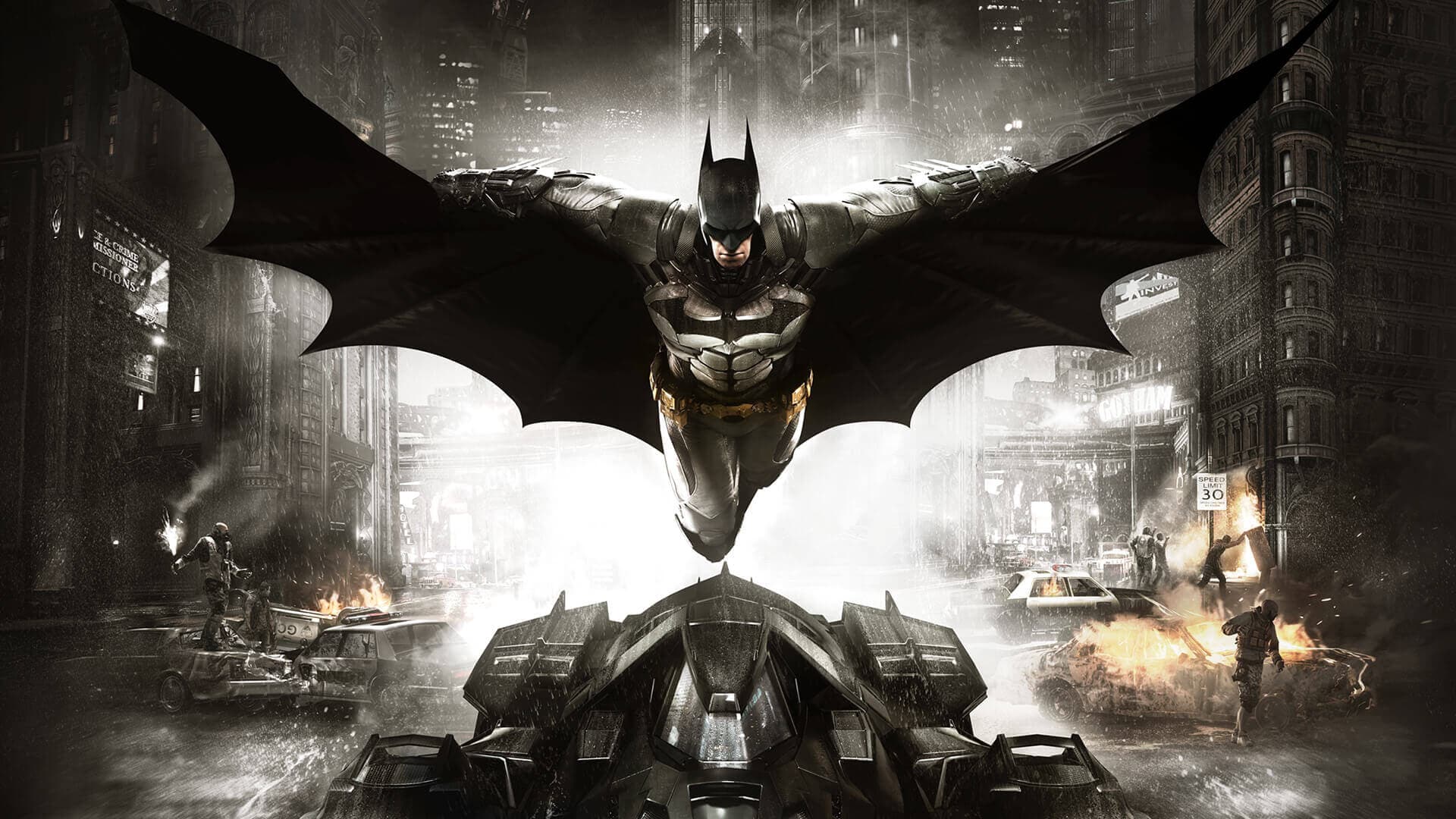 Of all the classic Superheroes, Batman is possibly the most psychologically compelling character.  His mysterious ethos and pathos are all distilled from a cognitive commonality.  His desire to protect, avenge and instill fear, drawn from a transformative tragedy that drives a single-minded force of will.

Clark Kent is Superman whether he is in the Superman costume, or in his every day suit.  He would be heroic despite his powers, but it is those god-like powers that define him as super.

Beside the fact that he is more anti-hero than hero, Bruce Wayne has nothing to make him super.  What makes him heroic is to compensate for his normality, he drives himself to achieve the maximum strength and skills that can be extracted from a human body, and augments that where possible with technology. His skill set is part techno-ninja, acrobat, genius and stage magic.

Like the Phantom, a mythology has been carefully created around the character of Batman, part Bogey man, apparition and avenging demon.  It is that mythology that is Batman’s power, it is what that mythology inspires, which makes him super.

Superman has a secret identity so that he can live a normal life and protect those that he loves from retaliation from his foes.  He calls himself Clark, but really he is always Kal-El in disguise.

Batman however is the secret identity, Bruce Wayne is the disguise, the only purpose of which being to protect the ethereal image of Batman from being broken down to an ordinary human being.

It is also interesting that with few exceptions, Batman’s villains are similarly non-superpowered.  Their power is also a pathologically manic caricature.  Their drives and motivations are less obvious than simple domination, monetary reward or revenge.  They also need to satisfy compulsive behavioural issues that are often their undoing.  Whenever they are captured, they don’t rot in prison, they are housed in Arkham Asylum, clearly these are not healthy people.

There have been many theories drawn out by fans regarding Batman’s sanity, some speculate that Bruce is in an Asylum himself, and these villains are the attending medical staff that he lashes out at in his delusional state. 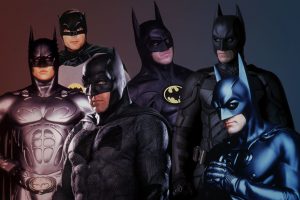 The characters have had a long evolution over 81 years, and whatever their original intention, have settled into a canonical commonality that is now reasonably consistent, at least sufficiently that they can be studied, examined and potentially diagnosed.

What has always been consistent, even through the campy 60’s TV show, is the emotional impact on Bruce from the death of his parents.  It is a key motivational factor upon which the entire insane notion of dressing up like a winged rodent and fighting crime is based.

So what demons drive Bruce Wayne?  It is unlikely he suffers from dissociative identity disorder.  Batman is not a distinct identity to Bruce, it’s a mask.  It’s also unlikely that he suffers from sociopathic or narcissistic tendencies, while his empathy is selective it’s still very much present.

My theory is that Gotham itself is an allegory for Bruce’s mind, it is often a dreamscape, foggy, dark, a mix of gothic and modern landmarks.  It is sick, and under attack by potential pathogenic entities that, given Bruce’s traumatic history, he is quite capable of falling victim to.  Bruce has definite signs of Post Traumatic Stress disorder, he often dreams of his parents and flashes back to the night they died in front of his very eyes.  He also suffers from depression derived from survivors guilt.

Can it also not be honestly said, that a man who fears that his friends will fall to evil so strongly that he is compelled to create counter measures to kill them should they go rogue, or who seems to have thoroughly contemplated every possible contingency in any given situation would not be suffering some form of obsessive/compulsive disorder.

Bruce has however created an Avatar of uncompromising moral strength in Batman, his immutable moral code serving as a guide rail through the insanity.  Alfred and Commissioner Gordon are his conscience, both serve to temper his vengeful spirit and protect his moral core.  Alfred is the canary in his mental coalmine, warning him when he is in danger of losing himself.  Gordon is more his legal and strategic conscience, both can recognise the corruption of law and order and it’s failures, and both seek true justice.

Each villain represents what Bruce Wayne could become from his trauma should he succumb to it, or surrender’s to an emotional temptation outside his moral regimen. 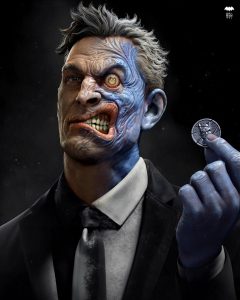 Harvey Dent or Two face, former district attorney with the coin that he decides fate with

Two Face is a personification of justice paralyzed by corruption.  His dissociative personality disorder so severe and perfectly equal, that neither side of his dual nature can overcome the other to formulate a decision.  His only option is to revert to chance to decide his actions, in the form of a coin toss.

Harvey Dent was Batman’s role model as the saint like District Attorney, but this indecisive, split personality is awaits him should he succumb to his grief, despair and anger, or lose his moral outrage.  Batman’s ability to act is reliant on incorruptibility, should his judgement be compromised or his integrity questioned he loses the fortitude to make hard decisions.  His only authority is the inherent nobility of his cause, without it, he’s a sad vigilante wanted by the police. 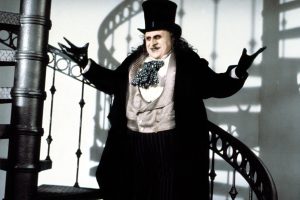 Batman and Penguin are an absolute dichotomy, one a flying rodent, the other a flightless bird.  A man in a freak suit vs a freak in a man suit.  Penguin has a napoleon complex driving severe insecurity due to his physical form.  His answer is to surround himself in the trappings of wealth and aristocracy.

Penguin certainly qualifies as a psychopath, but probably also represents borderline personality disorder.  As an object of ridicule, it is unlikely our dear Mr Cobblepott has the slightest empathy for his victims and would only value people by their usefulness or social status.

Without Alfred’s guidance, a young, traumatised Bruce could have fallen down the penguins path.  Buried his pain in the meaningless pursuance of wealth and status.  Bereft of parental guidance, or any real friends, young Bruce could easily have abandoned serving the community and served his own greed instead.

The Riddler is the personification of severe Narcissism.  He is a man of intense intelligence, so much so he could easily carry out a life of crime, without ever being caught or even suspected.  But he is compelled to display his cleverness, like a peacock flashing it’s tail-feathers.  Claiming responsibility for his crimes with his conundrums, always leaving the door open for Batman to prove his skills.

Given Bruce is basically a handsome, rich, intelligent, athletic socialite.  Narcissism is not only a possibility it is in fact one of the things Bruce Wayne uses to distance himself from the Batman.  Who would believe this playboy dilettante would ever be caught dead on a rooftop in a sweaty leather suit, punching on with common criminals.

Despite the camp humour of the earlier TV show, sexuality is neither ambiguous or high on Batman’s agenda.  Bruce Wayne may well surround himself with beautiful women, but rather than proving his heterosexuality, he’s merely stage dressing a largely harmless playboy persona to camouflage his Batman connection again.

From the film examples of the classic Keaton Batman, through to the Dark Knight trilogy, Batman/Bruce is more than capable of meaningful loving relationships, in fact it seems plain that he is hungry for that sort of intimacy.  Yet it is his fear for the safety of his partners, as well as his obsessive nature, that drives love away.  This fear is proven horribly accurate in Dark Knight rises when the Joker tortures Batman with the death of Rachel Dawes. 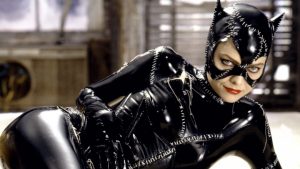 It is therefore interesting, that the two major female villains are not truly insane, but rather representations of feminine temptation.

Catwoman is as capricious as her feline namesake and is the representation of lust in batman.   She is sex personified, creating desire and want but abandoning Batman when a better deal comes along, or just because she’s bored.

As an opportunistic thief, Catwoman is not a major villain, nor highly pathological, except for kleptomania and some abandonment issues.  This lends her to being an occasional ally when Bruce has a dirty job he needs done. 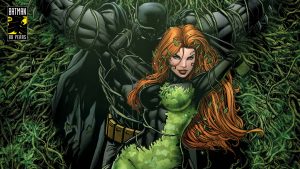 Poison Ivy seems to be more the dangers of a committed relationship and it’s natural stagnation of personal growth.  Poison Ivy makes men fall in love with her, then turns them into trees.  For playboy Bruce, this may be a literal representation of his fear of commitment, to surrender his ego to the prison of marital bliss.

One of the few villains with actual powers, Poison Ivy is both exotic and alluring, but suffers from an attachment displacement disorder, she cannot connect significantly with people and has put all of her empathy into her plants.

Dr Freeze is symbolic of emotional detachment and being frozen by depression, he displays anti social behaviour to both hero and villain and like Bruce suffers from obsession. 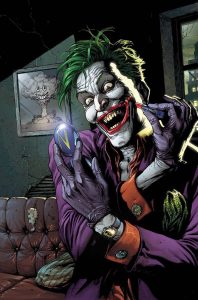 At the pinnacle there is of course Batman’s ersatz soulmate and eternal nemesis, the Joker.  The Joker is the eternal representation of nihilistic chaos.  He could be either truly psychotic and a manic sociopath, or has evolved into a new super sanity that can both create and recognise his own reality and live within it.  It would depend on which version of him you were looking at as he has been portrayed differently by many fine actors.  But the single most definitive would be Heath Ledgers, when it comes to a Joker that’s moved so far beyond sanity he recreated the concept.

The clown in modern society is a paradox of both joy and dread.  The joker is a living example of that paradox.  Despite his goal seeming to be the destruction or death of batman, this can only be preceded by either his utter humiliation, or by Batman accepting that they are one and the same.  As well the joker represents Batman’s greatest fear, to be a subject of mockery rather than fear.

Despite their polar opposite moral codes, the similarities in the characters are obvious.  Both are unpowered, their authority enforced by reputations, fear and force of will.  Both are loners and bullies, using a combination of technology and stagecraft to create a larger than life self image.  The difference is that Batman is all about control, preparation and protection of the innocent.  While his plans may be exorbitantly planned, the Joker embraces being out of control, his plans dependent on their sheer outrageousness to succeed.

So while my contention is that Gotham may merely be the stage for Bruce Wayne’s internal mental drama and that every player is simply an aspect of his consciousness, fear or potential pathological mental state, all wrestling for control.  The truth is it doesn’t really matter which it is, whether perceived reality or imagined reinterpreted delusion, the message is the same.

Whether it’s a battle for Gotham’s soul or Bruce Wayne’s sanity, it’s only Batman that can save them both.