Superman II, which came out June 19, 1981, has its good and not-so-good elements. It had a tough act to follow after the powerful success of its predecessor: Superman (1978). However, this movie wanted to be its own thing and was the beginning of the end for the Superman movie franchise.

Mount Rushmore once General Zod and his crew are done with it! Picture credit to lylesmoviefiles.com

I cringe every time at the modifying of Mt. Rushmore’s figureheads to resemble General Zod, Ursa, and Non… and most especially at every mention of “Planet Houston”. Desperate grabs at comedy!

All the bad attempts at humor take away whatever seriousness and respectability Superman gave this movie. There’s the backwards antics of the citizens of Metropolis as the Kryptonian renegades use super-breath to blow everyone back; leave us not forget the oddly-placed dude on roller-skates going backwards, too.

What also doesn’t sit well with me is that Superman kills in this movie! In the climactic battle in the Fortress of Solitude, Superman causes a de-powered General Zod and his two cohorts to fall into the unknown depths of the Fortress; for all we know, to their deaths! Shame on this movie for taking the easy way out! 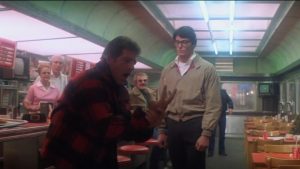 Clark Kent/Superman gets the upper hand on a bully who beat him up earlier in the movie “Superman II”. Picture credit to filmdaily.co

Speaking of which, this movie also has Superman take *revenge*! Earlier in the film, a de-powered Clark Kent gets into a fight at a truck stop eatery with a trucker who was hitting on Clark’s lady-love Lois Lane; Clark is pummeled and left a mess. Once the major threat of Zod and his minions is over, we find a re-powered Clark return to the same eatery to pick another fight with the same trucker, only with predictably different results as the bully is taught a lesson: no-one one-ups Superman!

Part of why this movie is not so good is because it’s not how it was originally intended to be seen! Long story short, director of Superman, Richard Donner, had a falling out with producers Ilya and Alexander Salkind and despite having shot the majority of Superman II, the Salkinds shelved most of what Donner shot and hired director Richard Lester to reshoot Superman II into the less serious, slightly slapstick comedy superhero flick we wound up getting.

What does work about the movie is that it asks some interesting questions: what would happen if Lois Lane ever found out Clark’s secret identity as Superman and how would it be handled? What would happen if Superman had not one but three enemies just as powerful as himself to contend with? 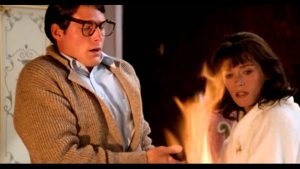 Lois Lane discovers Clark Kent’s secret identity after a foolish blunder (or was it?) when Clark slips his hand into the fireplace. Picture credit to YouTube (via megahappy2beme channel)

In perhaps the most silly “accidental” reveal of Clark’s secret identity, Lois discovers the truth about his being Superman and the two explore their relationship, perhaps a little too intimately for a movie kids are going to see; and by the end we reach the inevitable point where both characters are left with a dilemma: for Lois, what to do with this knowledge that Clark is who he is; and for Clark, how he can serve humanity as Superman and have time for one single human above all others. Ultimately Clark causes Lois to forget that he is Superman.

Seeing Superman actually face off against powerful supervillains is a welcome change from what they did in the first movie with its numerous impressive displays of superfeats as he fought against shifting land masses and so-on to avert disaster; those were all well and good, but I imagine the fans and viewing public were all ready to see the superhero go toe-to-toe against a legit supervillain. Well, we get our wish as we see Superman battle the three Kryptonian renegades who prove more than a serious match.

What impact did this movie have on the Superman movie franchise?

On a budget of $54,000,000 Superman II made $14,100,523 its opening weekend and a Domestic Gross of $108,185,706. Superman II definitely made its money back, but I think the Domestic Gross number tells that people were only just so taken with what they got. It flew, and would see two more sequels, but the trend would go downward.

What’s more, this movie — even with its positive aspects — opened up a world of goofy possibilities to what was a respectable, powerful movie franchise in the making. The rest of the Christopher Reeve-related Superman movies would have silliness, slapstick, and over-the-top distractions which made the franchise a laugh. Superman II was the death knell for the Man of Steel as a film hero; watch it at your own risk!