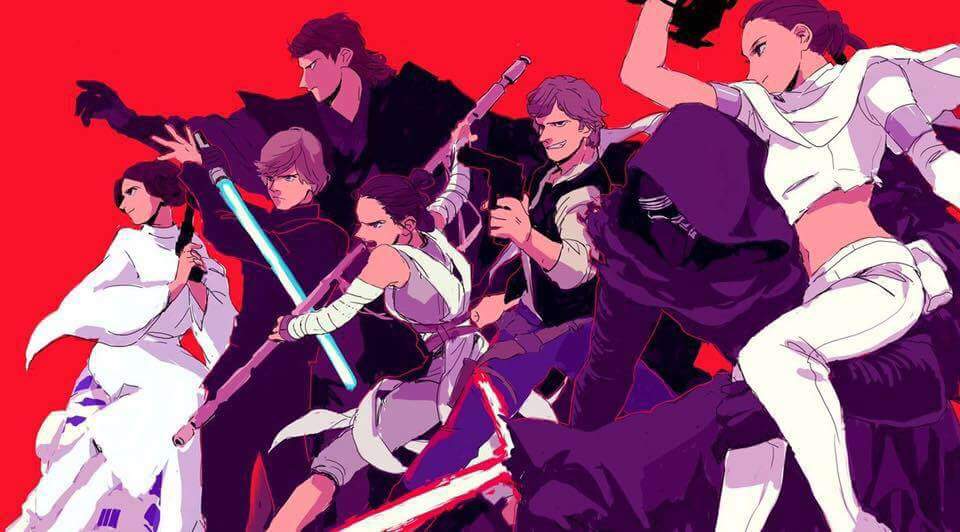 Since 1977, fans have received a total of 11 live-action Star Wars movies, 4 animated series, 5 micro-series, and 1 live-action series. In addition to these we also have over 140 different Star Wars video games and over 380 books in Legends alone. All of these have helped shape the Star Wars universe and, ultimately, the fandom into what they are today.

What we don’t have yet is an epic anime adaptation of the beloved universe. Hey! Don’t groan just yet. I’m here to tell you that the Star Wars franchise could benefit from joining forces with Japanese anime.

Search your feelings, you know this to be true!

Credits Will Do Fine

We all know that credits are what makes the galaxy go round, so let’s start there.

Star Wars was created by George Lucas and has been fueling our sci-fi addiction since 1977. From A New Hope to The Rise of Skywalker, Star Wars has brought in more than $10 billion just from the box office. Add in all the aforementioned books and series, as well as all the merchandise, and Star Wars has become a $70 billion giant in pop culture.

Anime, on the other hand, started as a five-minute chalk animation in 1917, created by Shimokawa Oten. Over the past century, Japanese anime has evolved into a beautiful obsession all over the world. According to the Association of Japanese Animations, anime production companies now provide anime to 112 different countries. Over 87% of the world’s population has been reached by anime in some form. Additionally, as of 2018, the global anime market size was valued at over $20 billion.

Financially speaking, if we combine Star Wars with Japanese anime and manga, we’re looking at a monetary superweapon. Our wallets can’t repel firepower of that magnitude!

Now that we’ve got the boring stuff out of the way, let’s fight! If you name any popular anime, I could probably point out multiple epic fight scenes. Some involve hand-to-hand combat, some involve swords, and still others involve space ships and giant robots. Anime has no shortage of intense, emotional battles.

Star Wars is no slouch in the battle department either. From planetary assaults to insane lightsaber battles, every movie and series has their share of epic battles to choose from. Animating Star Wars allowed for crazier fights and the depiction of more diverse fighting styles. The Clone Wars alone has 7 full seasons of animated action and emotional story-telling.

Now, close your eyes. Actually, keep them open. I need you to keep reading!

Imagine Anakin’s battle against Obi-Wan in Revenge of the Sith. Now imagine that fight in an anime form with the epicness of Sword Art Online or Bleach.  Tell me that wouldn’t be the best-looking fight. Go on! I’ll wait.

Star Wars movies have one of the most recognizable openings. When one first sees that opening crawl with the theme blasting at max volume, one can’t help but be sucked into the story from the start. It’s such a staple, that it took me some time to come around to The Clone Wars series simply because they did not have that opening crawl. Even the movie credits are considered a staple! It’s just not quite a Star Wars movie or show without those blue credits at the end.

I just want to see an anime ending featuring Figrin D’an and the Modal Nodes. Is that too much to ask?

The Force is Anime

Star Wars and anime are a match made across the stars. The franchise has only been enriched by the various animated series we’ve received, and it can only get stronger as a Japanese anime. This is our opportunity to bring fans together to rule the galaxy as Jedi and Otaku.

Or we could go with Teen Titans Go animation. Would you like to know the probability of that working in our favor? It’s low. It’s very low

What are your thoughts? Would you like to see Star Wars as an anime? Got a favorite style you’d prefer? Follow us on Facebook and join the conversation!