Star Wars Toy Fans! Feel The Throwback To The "Power Of The Force"! 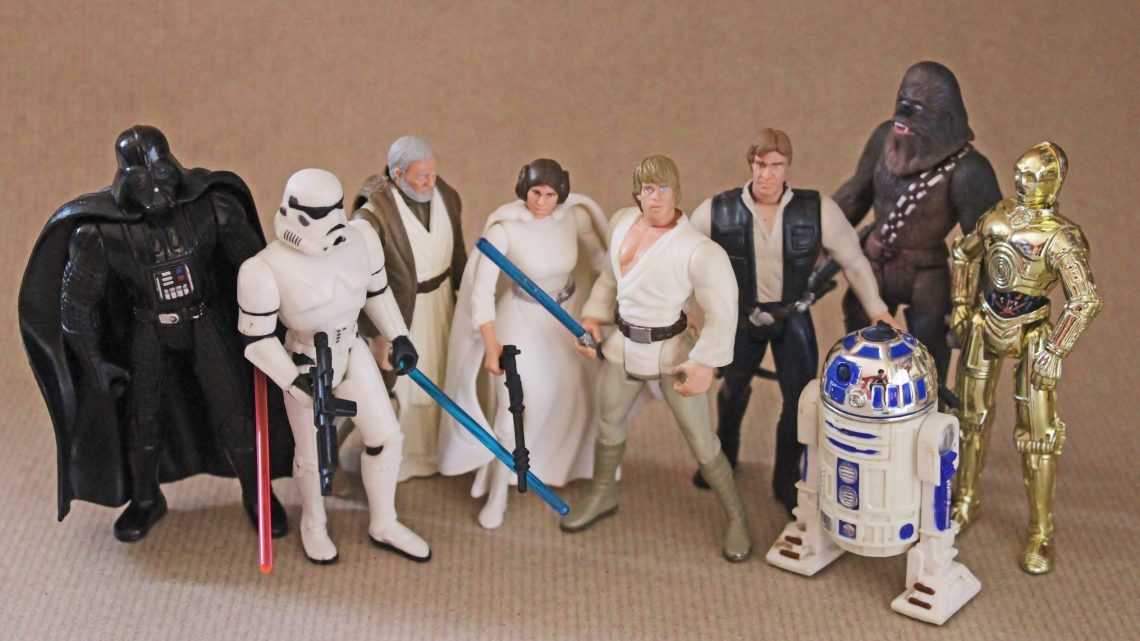 The “Star Wars: Power of the Force” toy line from Kenner/Hasbro lasting from 1995-2000 was the coolest, almost artistically perfect one ever to be produced for Star Wars! They came in a black package with a red or green lightsaber blade line along the corner for extra excitement to young eyes! These toys had hard plastic, they had simplicity, and they weren’t easy to break! Many toy lines have come since its run, but they just haven’t been as good in quality; either in product or in artistic value. 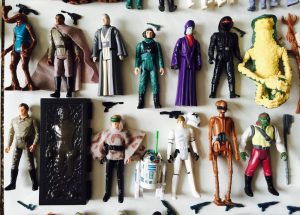 Action figures from the original “Power of the Force” toy line! Picture credit to futureofstarwars.wordpress.com

This is not to be confused with the vintage “Power of the Force” line which had already ended its run a decade prior in 1985; no, this under topic now is the second one to bear the title… “Power of the Force 2” (or POTF2); my favorite of the Star Wars toy lines!

I say it was almost artistically perfect because while I will sing the line’s praises to my last breath, visually it had one flaw: the male action figures, most notably Luke Skywalker, were a bit more muscle-bound than their on-screen counterparts… It’s a funny flaw I notice now as an adult; but I remember as a little kid in the 90’s not really caring about this fact so much and still having the time of my life playing my Star Wars adventures with Luke, Han, Chewie, Darth Vader, and more besides! Anyway, the muscle look was phased out around 1998 for a more screen-accurate one and Luke was suddenly the thin farmboy again. 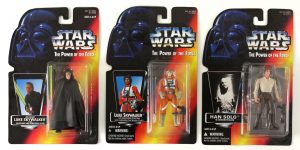 My favorite action figure was the Luke Skywalker in his Jedi Knight outfit from Return of the Jedi (1983); it came with a black plastic removable cloak and his green-bladed lightsaber. This figure was simple; it looked fairly like Luke, didn’t need much to it, and was ready for Jedi adventure as I had him escape the deadly Sarlacc pit in my elementary school’s sand pit!

The figures were always painted brilliantly; I remember no particular flaws in the color scheme… The tones were lively; never dull or badly done. Even C-3P0’s wires around his midsection had nice attention to detail until natural wear would scratch it off and reveal the shiny golden plastic beneath. The toys always looked the part; that’s what mattered. 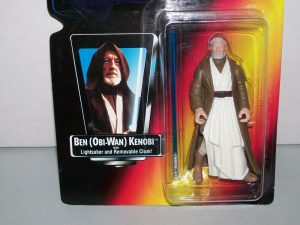 Interestingly, this line had a few variants; of which I have a few: a Luke Skywalker and an Obi-Wan Kenobi, both with longer-than-normal lightsabers. Turns out that the original releases of these two figures (and Darth Vader) had these freakishly long lightsabers, but were re-released with the shorter versions everyone got used to. To me, they’re just the weird variant. 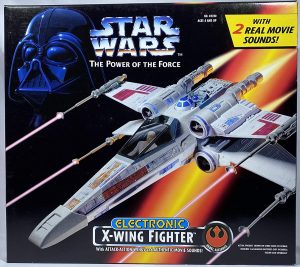 The best vehicle from the line was the Electronic X-Wing Fighter! This toy, best with the Luke in X-Wing Fighter Pilot Gear figure of course, was loads of fun. You could have it in closed or open X attack patterns depending on if you pressed down on the R2-D2 near the cockpit; also, you could hear the sound of the engines whooshing when the wings were open! Press one of the buttons and you’d hear the sound of the ship’s blasters. The only trouble was that the ship wasn’t exactly accurate to scale with the action figure; it fit into the ship, but it was noticeable that the ship should have been bigger.

These toys didn’t break and didn’t have loose, wobbly parts; they were solid, sturdy, simple, and fun to play with. True they didn’t look screen accurate, but they looked awesome at the time and they awakened and played with imaginations of many kids back in its day! Most of the lines released since then weren’t as strong and tried even less to look like their screen counterparts, I find. 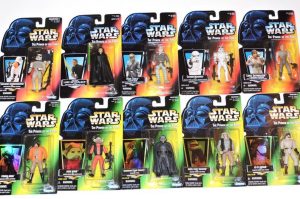 An assortment of “Power of the Force 2” (POTF2) figures mint in box; red and green editions! Picture credit to etsy.com

The challenge though, which I never succeeded in, was keeping any in their boxes. I bought those figures with my allowance, and by golly I played with them to my heart’s content! Oh I have unopened figures now; they hang from my wall like my own collection of art, because that’s what they are to me…

Pieces of art from a time gone by.