DC Versus Marvel: Beatdown of the Century

Superboy To Take Mantle Of Superman! New "Superman" Titles Due This Summer!

On the WandaVision Timeline: Ten 1980's Live Action TV series You May or May Not Have Seen

On the WandaVision Timeline: Ten Live-Action Superhero Shows from the 1970's You Should Watch 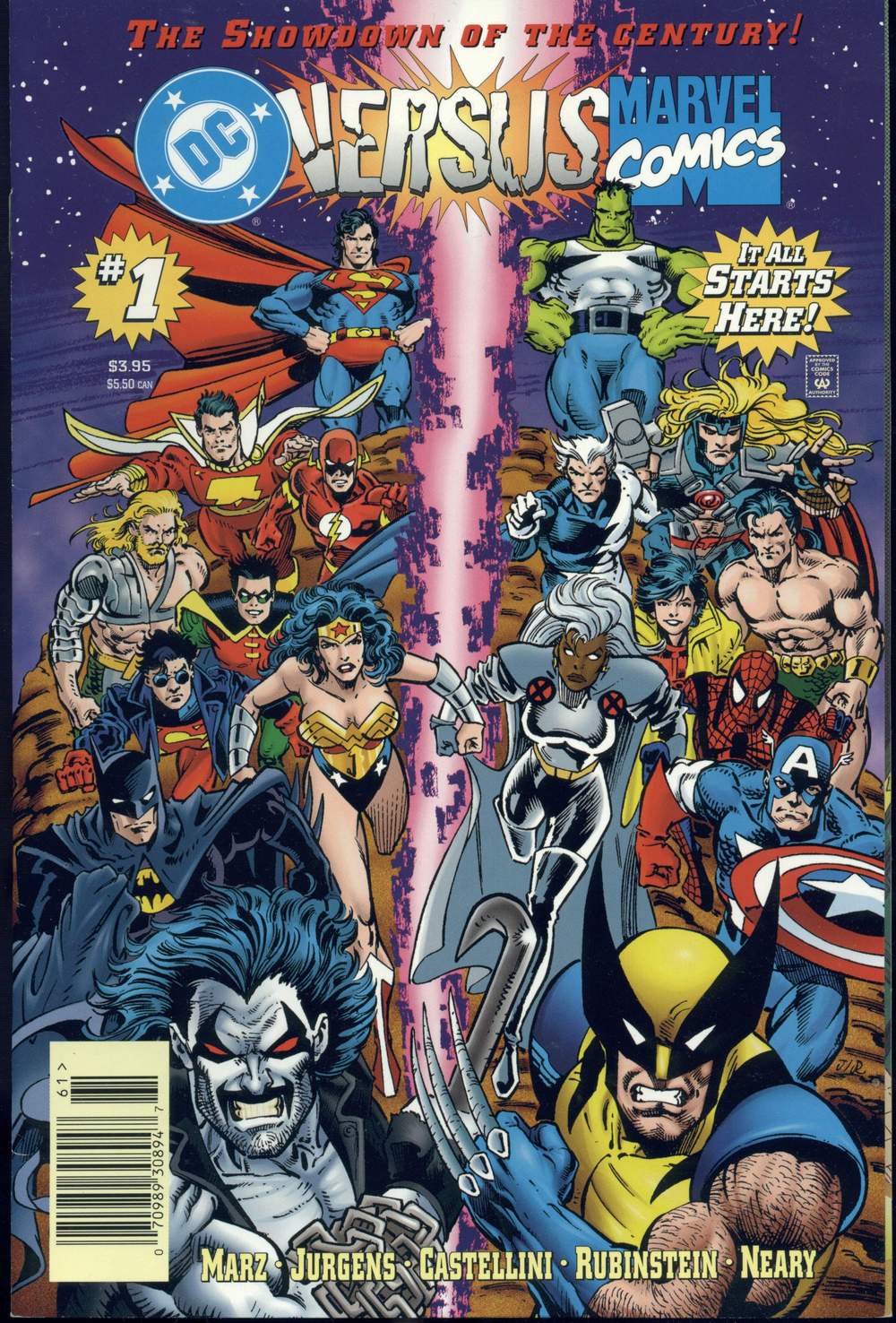 Two brothers, both a like in dignity. In the fair cosmos, where we lay our scene. From ancient grudge break to new mutiny, where civil heroes make civil blood unclean.

In 1996, in a story that is right out of something from Shakespeare, DC comics and Marvel comics came together to release a 4 issue comic run titled “DC vs. Marvel”. Two brothers, one for each of the universes, suddenly become aware of each other and declare a “Mortal Kombat” style faceoff. Heroes from the DC universe were pitted against the Marvel universe in a winner-take-all battle for the right for their universe to exist.

What made this such a great concept was that 5 of the 11 battles were determined by reader vote. The other 6 were determined by the writers and project leaders behind the comic. Ballots were issued in the back of the first comic as well as to comic book stores around the country. 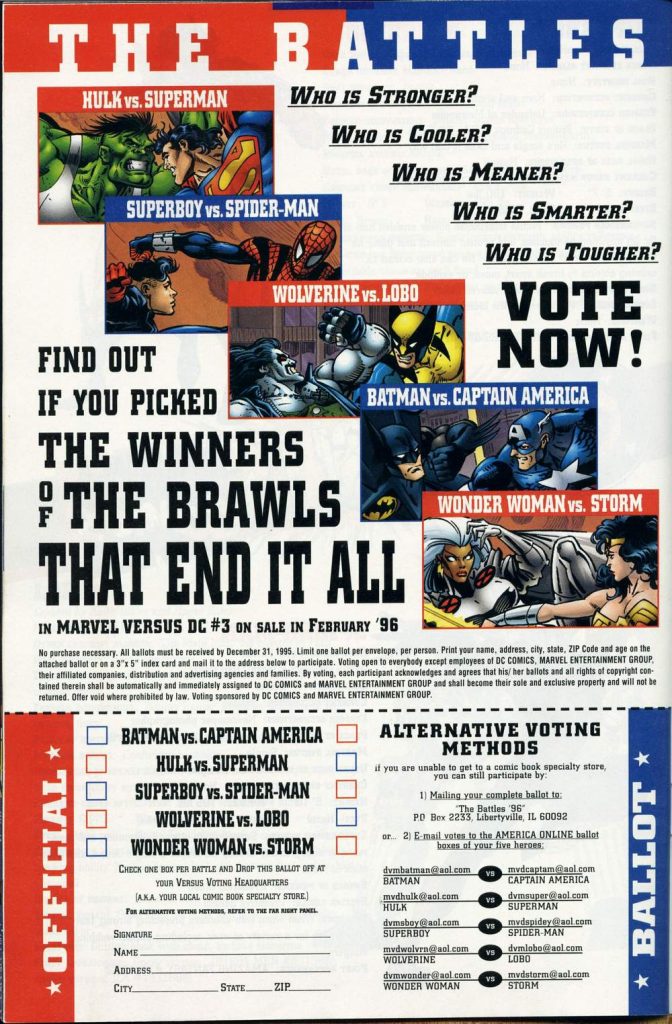 Now 25 years later, I would like to look at each fan-voted matchup and determine if the outcome today would be different based on the popularity of those characters. 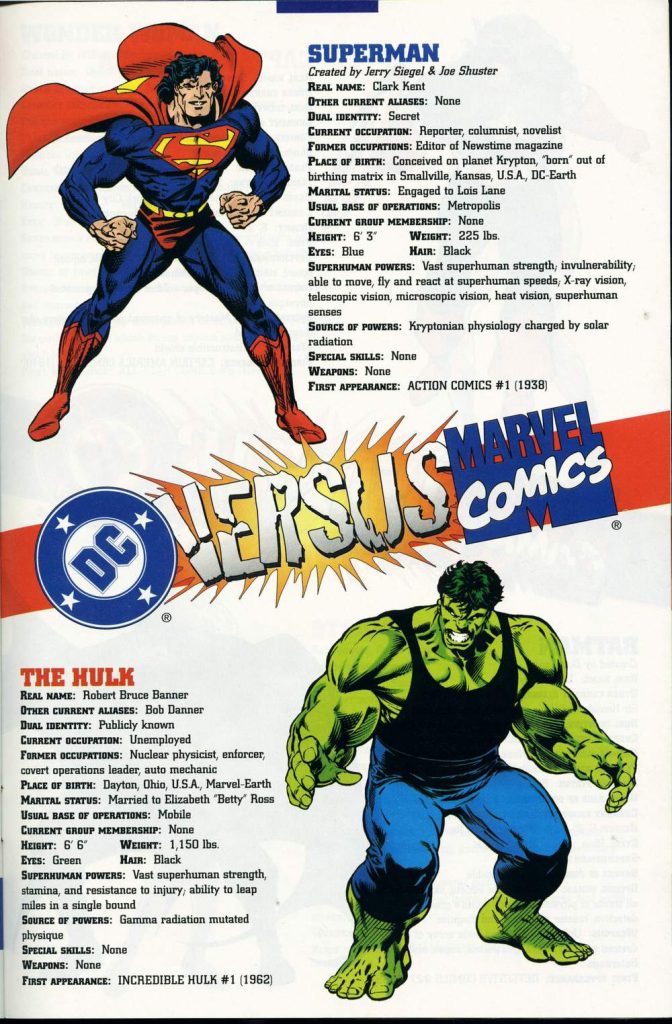 Superman vs the Hulk, insert from issue #1 from comicextra.com

In issue number 3 we see that Superman and the Hulk are thrown into battle against each other. They are teleported way outside of civilization to avoid causing collateral damage or casualties. The Hulk in this is Professor Hulk. He is the perfect combination of Hulk’s strength and size, mixed with the brains and cognizance of Bruce Banner.

Superman, after a brutal fist fight between the two heroes, manages to subdue the Hulk with his heat vision, and since Hulk becomes unable to battle, Superman is declared the victor.

Based upon the fight we see in “Avengers: Age of Ultron”, between Iron Man’s Hulkbuster suit and the Hulk, I would still give this fight to Superman. The Hulk is a massive, virtually invulnerable, mass of muscle capable of withstanding bullets, lasers, and brutal physical attacks. Superman is faster, and since he draws his power from Earth’s yellow sun, has practically unlimited power. Hulk’s only chance to beat superman would involve Kryptonite. I think the voters got this right and would still hold true today. 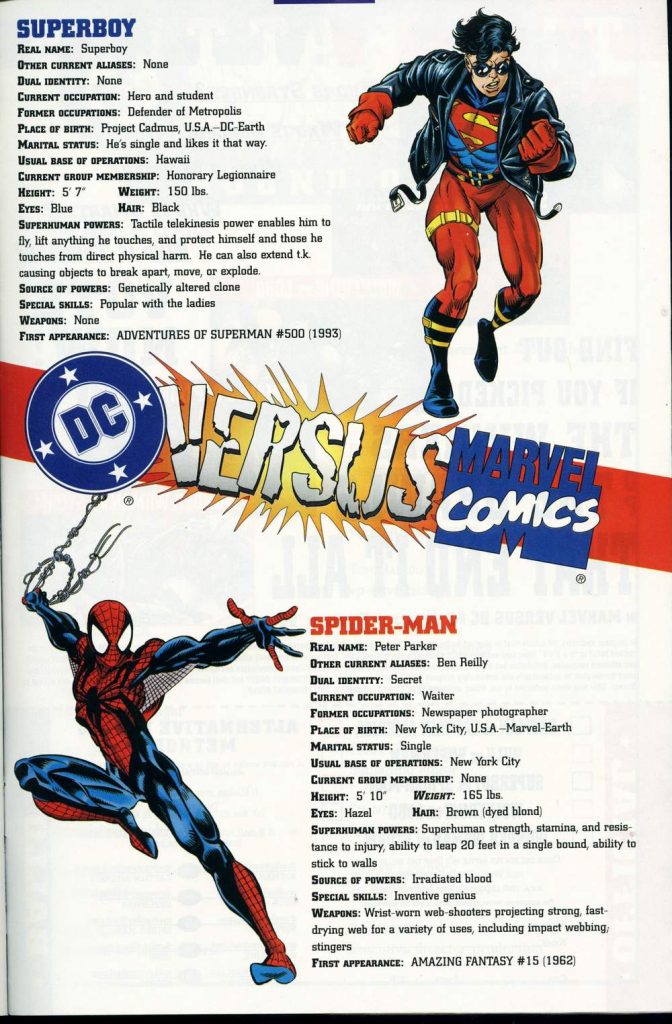 Superboy vs Spider-Man, insert from issue #1 from comicextra.com

Superboy, the clone of Clark Kent, with most of the same powers, strength, and speed, is pitted against Spider-Man. The battle takes place on top of a large building in downtown Gotham.

The readers voted that Spider-Man won this battle. After some wise-cracks between the two, Spider-Man’s “Spidey Sense” mixed with his enhanced strength relative to a spider’s, is able to dodge out of the way as Super Boy slams into a power transformer. Super Boy is stunned and unable to fight after this, declaring Spider-Man the winner for the Marvel Universe.

If we are using popularity as the deciding factor, I would give this one to Spider-Man as well. Peter Parker is a genius and a pretty good at outsmarting his foes. I also don’t believe that Superboy has enough of a fan base today to declare him the winner. However, in the terms of a practical fight between them, Superboy would be the victor. He has a power called “Tactile Telekinesis”. This allows him to lift anything he touches but also protect him from sustaining physical harm. 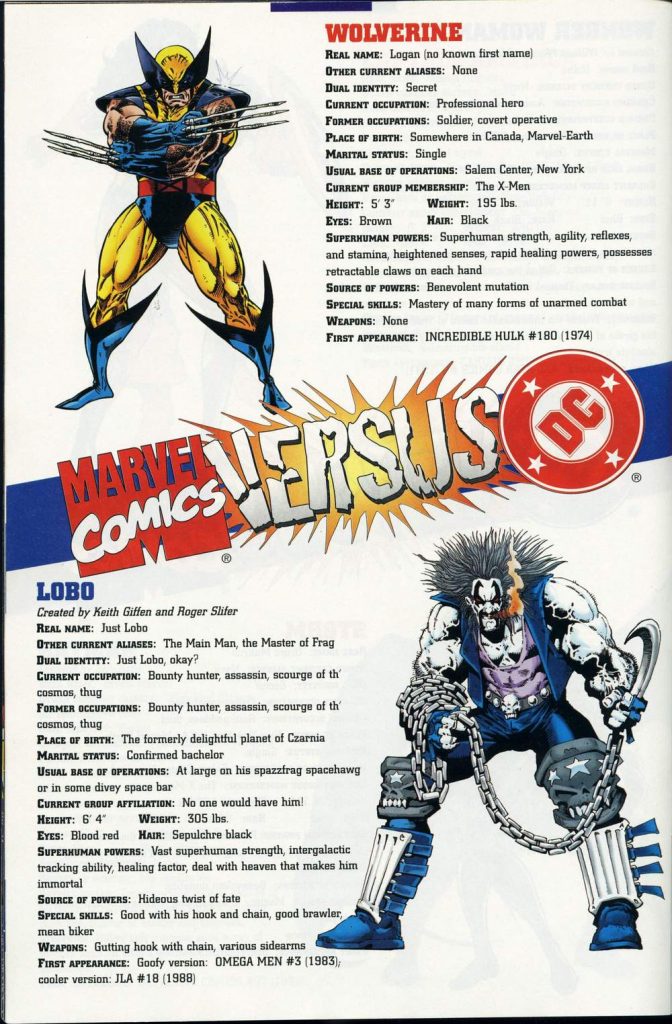 Wolverine vs Lobo, insert from issue #1 from comicextra.com

Lobo, the amoral, tough-guy, bounty hunter from the DC universe, takes on Marvel’s Wolverine. In a fight fitting for both characters, it takes place in a bar on an alien world.

By reader vote Wolverine takes the battle and smokes a cigar after scoring another point for the Marvel universe. Wolverine takes a beating from Lobo and his hook, but ultimately beats him down in a fight that happens largely off panel. We are left with the assumption that Wolverine knocked him unconscious.

This is a tough one to call for me. Strictly speaking, this fight would be a draw. Everyone knows of Wolverine’s enhanced strength and healing factor essentially making him (mostly) immortal. In terms of popularity today, Wolverine would win in a vote I think. If readers are familiar with Lobo, they know that he also has a healing factor and was granted immortality by a cruel twist of fate. The only practical chance either has is to cause enough trauma or render them unable to battle, but neither could kill the other. 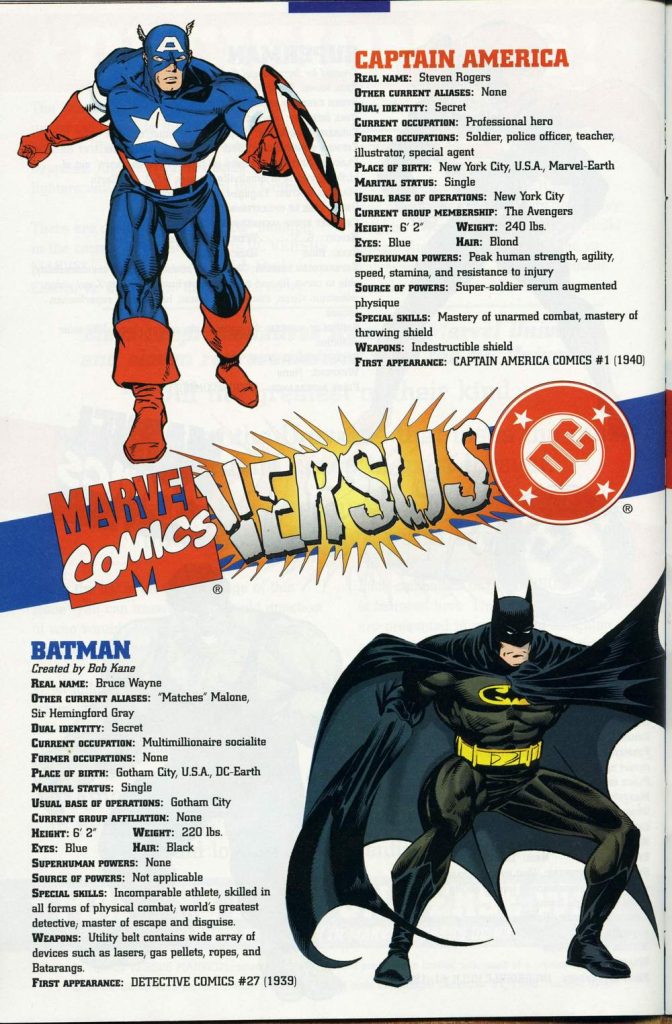 Captain America vs Batman, insert from issue #1 from comicextra.com

Taking place in the sewers beneath Gotham is a fight between two iconic heroes from each universe, Batman and Captain America.

Not much is shown overall of their fight but we are told it lasts for hours. One never besting the other. Batman’s martial arts prowess, ability to use the shadows, and batarangs against the super soldier and his shield. Batman wins this fight because a rush of sewer water floods the cavern knocking Captain America off of his feet and into a large sewer chasm. Batman, in true form, rescues Captain America from drowning, and helps him to the surface.

This fight bothered me a bit. In 1996, Batman was at the height of his popularity with the animated tv show, a successful run of comic book arcs, and several movies. Captain America by comparison was virtually unknown. If this were done today I would give the fight to Captain America based upon the popularity of the MCU movies over the DC movies. Also because people are more aware of his super strength, vibranium shield, and sheer resolve. I like Batman, but at the end of the day he is a billionaire with toys against a battle-hardened-super-soldier-war-hero. 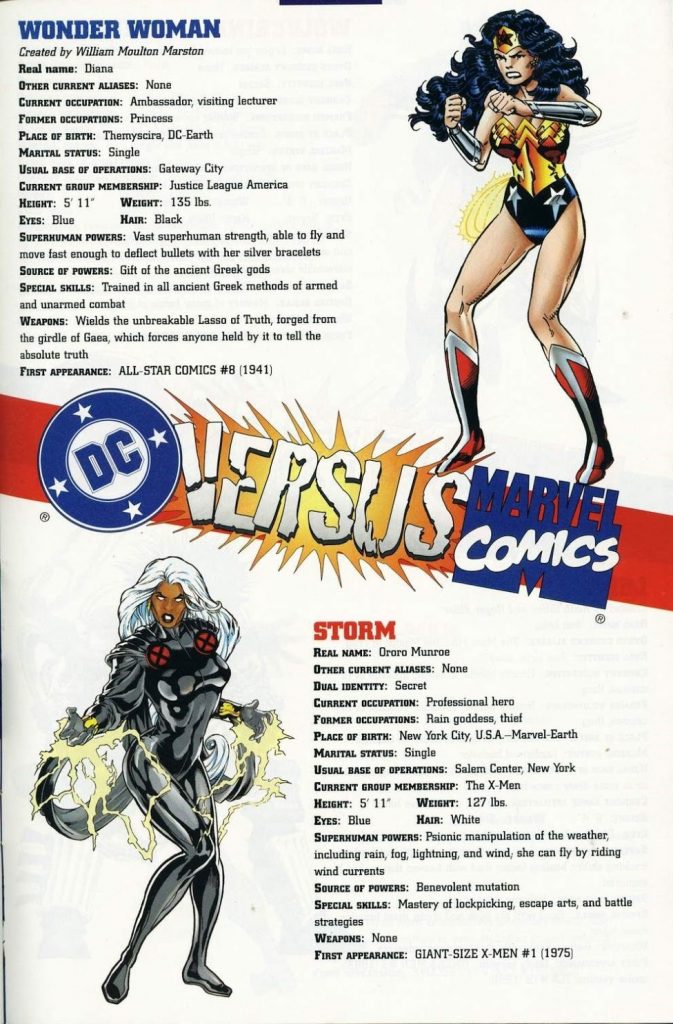 Wonder Woman vs Storm, insert from issue #1 from comicextra.com

This last fan-voted battle took place in the rainy skies above Gotham. Storm, the African goddess with the ability to control the weather against Diana, the Amazonian Princess of Themyscira.

In an interesting turn of events we discover that Wonder Woman is indeed worthy to lift Mjolnir, the hammer of Thor. As she faces off against Storm, she feels that Mjolnir would give her an unfair advantage and tosses the hammer aside. Ultimately Storm renders her unable to battle with a massive lightning strike.

What do you think? Who do you think would win in each matchup? Comment down below your votes and let’s see what Universe would exist in the end. Also, be sure to check out our Facebook page, Geek News Now, for news, contests, and awesome GNN stuff, and subscribe to our Youtube channel for more awesome content including live panels, movie reviews, and Twitch streams.